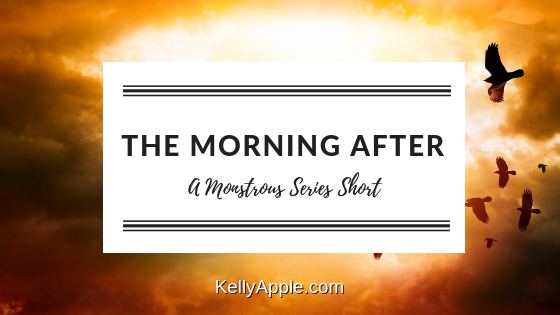 The Morning After
Ari
Monstrous

It was over. She’d done it.

Ari’d given the supernatural community a party they’d never forget.

Nudging the limp form at the other end of the couch with her foot, Ari waited until Ella grumbled something that sounded like a what. Stifling the laughter that threatened to come out at the harpy’s ill-concealed irritation at being forced to interact with her, Ari nudged her again. “Do you know where Michael and Liam went?”

A rustling of wings and Ella lifted her head to stare blearily at her. “No. Do you?”

Obviously not, silly harpy, or she wouldn’t have asked. “Nope,” Ari chirped, watching her friend wince and lower her head back down at her cheery tone.

Apparently, they hadn’t cleaned out the county of supernaturally made moonshine like Ari thought. A few jars had put in an appearance toward the end of the evening and Ella had—unfortunately for her—partaken of a wee bit too much.

Ella’s hair, Ari decided, looked like she’d been hitting the sheets all night with her mate. Vigorously.

The brief glimpse she’d gotten of it had been equal parts horrifying and fascinating. The one side defied gravity.

Trying once again to keep her laughter in, Ari nudged her again with her foot. “Do you want me to get you something for your head?”

Ella grunted something Ari took to be affirmative. Right. Ella had never had the fantastic experience of an epic night out at a bar followed by an even more epic hangover.

And here she was, not hung over.

MAN, she knew how to stick to her promises, didn’t she?

Leaving her suffering friend draped over the couch, Ari went to the kitchen and started the biggest, blackest pot of coffee she thought Ella would be able to stomach.

As she waited for it to brew, she looked the kitchen over with a critical eye. Not as neat as Liz usually kept it, but hardly the mess it could have been with all the people in and out of the house last night.

As long as no one had found the box of cinnamon rolls she’d stashed in the pantry for this morning, she’d consider the evening a success.

But if someone had found those precious babies…

Dragging one of the kitchen chairs into the pantry, Ari climbed up and groped on the top shelf until her fingers found the familiar contours of the bakery box.

She wouldn’t have to hunt anyone down and offer them up as a blood appeasement to the old gods.

She’d gone all out, too. Which meant Ella wasn’t just getting a steaming cup of strong as heck coffee. She was also getting one of the best breakfast foods known to man or monsters.

Cradling the box like the treasure it was, Ari climbed back down. Prolonging the agony of not opening the lid and taking a deep, cinnamon-laced breath of her goodies, she carefully placed the box on the counter and put the chair away.

By then, there was enough of the magical java-juice to put together a cup for both her and Ella. A splash of cream and a touch of sugar.

Glancing toward the room housing her suspiciously silent friend, Ari added another spoonful of sugar to Ella’s cup. The harpy was going to need all the help she could get this morning.

Only then did she open the lid of the bakery box and breathe deep.

Hot damn. That right there was a cure for anything that ailed you.

Flying high on both the sugary treat in her hands and the satisfaction of a party that went off without a hitch, Ari balanced the two mugs of coffee and the box of cinnamon rolls on her hands and went out to give Ella the absolute best cure for her misery.