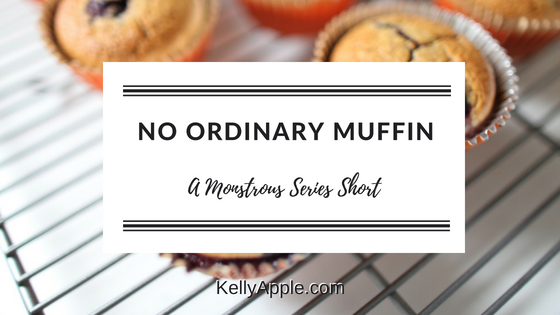 “It’s just a muffin, Michael. It’s not like it’s going to bite you back.”

Michael gave Ari a dubious look and sniffed carefully at the monstrosity she’d put in his hand.

Oh, it looked normal on the outside. It was a visually pleasant golden brown, the top forming a nice crust.

But this was no ordinary muffin.

Ari had a hand in making it and that always spelled disaster.

Hell, he could smell the excess salt on it without taking a bite. If he weren’t a werewolf, the smell alone would probably send his blood pressure through the roof.

“Who helped you make these?” he asked, taking another sniff.

“Cin.” Ari frowned. “Well, she watched. I did all the heavy lifting with this recipe.”

Michael considered Ari his best friend. She was loyal and brave and she had never hesitated to speak her mind.

For that reason, Michael considered it his sacred duty to tell the nymph that she should never step foot in the kitchen again with the intention of baking.

He opened his mouth and looked into those big, blue eyes of hers and just…couldn’t say it.

After all, she probably already knew she wasn’t a good cook. Well, wait. Actually, she wasn’t half bad at making grilled cheese sandwiches and quesadillas.

Maybe that was the trick. She had a decent ability at making cheese-based foods. If he could steer her in that direction—and that direction only going forward—she’d never need to know how unappetizing her baking was.

He still held the muffin close enough to his nose to catch the scent and he lowered it and put it carefully on the table as he gave her an apologetic look. “Sorry, yeah.”

Ari made a considering noise in the back of her throat. “Cin said you’d be able to tell. I should have listened.”

She didn’t sound overly upset. More cheerfully clueless that the creation she’d worked on could probably be used as a weapon of mass destruction.

“You can help me with the next batch,” she went on, gloriously oblivious.

“Or,” Michael said, desperately searching for a way to salvage what looked to be a fruitless afternoon, “we could go to that bakery and get a variety of muffins. They had those blueberry sour cream ones you like earlier in the week.”

Wow. That phone sex voice should stay in the bedroom. It was all needy and wanting and something only a woman’s mate should hear.

Michael cleared his throat. “It’s Thursday, too. You know what they have on Thursdays.”

Nymphs, man. They could turn anything sexual. “And those giant cinnamon rolls.”

Ella and Ari had been talking about those just the other day. Or moaning about them, if he remembered correctly.

“You’re right. We should go to the bakery.”

Damn right he was right. They should go to the bakery and toss the muffin shaped monstrosities Ari had made in the trash.

“You have the best ideas, Mikey.”

Michael hid his wince. He loved Ari, but he wasn’t all that fond of the nicknames that popped out of her mouth sometimes.

Mikey. Uggh. That made him sound like an eight-year-old with scraped knees and a dirty face.

But if he showed any sign of weakness where that stupid name was involved, Ari would delight in calling him by it every chance she got.

As she sweetly told him once, she teased because she cared.

All he could think was, Dammmmmn, she must love him a lot.

“Go find your shoes and tell your mate we’re heading into town.”

The nymph had a one-track mind. Which wasn’t a bad thing, but when she fixated, she fixated.

He sent her off and scooped up the offending muffin as soon as she was out of the room. He needed to get rid of this.

No, he needed to get rid of all of them.

Before she came back.

He wouldn’t inflict these on his worst enemy.

Slipping into the kitchen, he found a full batch cooling on the counter.

Michael didn’t feel a smidgen of guilt when he upended the entire rack into a plastic bag and tied it off. Or when he put the first bag into another to further disguise its contents.

It only took a moment to take the bags out to the garbage bin behind the house.

He was fast and stealthy. No one would ever be able to pin this deed on him.

Dumping it inside, he closed the lid with a feeling of satisfaction. No supernatural in the house would be forced to choose between eating one of those muffins or hurting Ari’s feelings.

Turning, he froze when he found Liam behind him.

“Please tell me those were the muffins.”

Oh, good. The big guy was on the same page as him. “Those are the muffins.”

“Thank the gods. I was afraid she’d wear me down and I’d have to eat one.”

“My thought exactly.” Michael glanced toward the kitchen door. No sign of Ari yet. “We’re heading to the bakery to get a few things that are slightly more palatable.”

Liam nodded, all seriousness. “Good idea. Those cinnamon rolls she loves will distract her.”

Which was exactly why Michael had brought them up in the first place. “I’ll keep her occupied for a while. You hide the rest of the baking ingredients before we get back.”

The two men shared a look, in complete agreement over what needed to be done.

Ari was a lot of things—a good friend, a lusty mate, a force of nature—but it was their solemn duty to do everything they could to keep her away from that banana muffin recipe in the future.

Because the one thing she wasn’t was a good baker.

And that was okay.

Want to see how Ari and Michael first met? Monstrous Tales: The Complete Series is the beginning of their friendship. (Or grab The Wicked Wolf if you prefer to read it as a serial.)