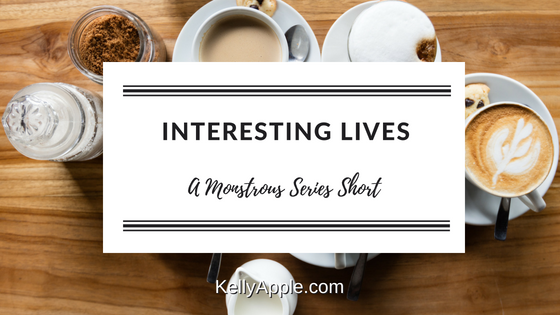 If Ari’s life were to be written as a sitcom, it would be one of those madcap, laugh a minute ones where everything seemed to turn out right despite the odds being against her.

At least that was what Ari thought.

Like, there’s be an episode where she missed out on a sweet, sweet parking spot when she went shopping only to have the car that stole it from her getting hit by a runaway cart and getting its paint scratched to hell and back.

You know, it would be one of those shows where even the bad things turn out to be fortuitous because fate was smiling down on her.

She’d have a romantic interest in this sitcom, of course. A hunky intellectual who always paused when he walked through doors to give the women viewers a chance to admire his gorgeous physique.

Her own hunk and a half walked by the window and Ari let out a sigh, unable to stop herself from craning her neck to watch until he was out of sight.

Screw that fictional sitcom. What she had was so much better than anything any script writer could come up with.

No actor could ever compare to Liam.

They didn’t have his gorgeous green skin. Or his muscles. Or his beautiful, frisky tentacles.

Hot damn, she loved that man.

She should go get him. Right now. Immediately, in fact.

Maybe coax him inside with naughty whispers of everything she wanted to do to him.

Lead him to the bedroom and…

“I can always tell when you have Liam thoughts running through your head.”

Cin’s words startled Ari so badly she jolted in her chair, her eyes going wide.

Damn. She hadn’t realized she wasn’t alone. Good thing she’d kept her hands from straying south while contemplating all the things she’d like to do to her favorite monster.

“And there you go again.”

Caught, Ari made a face at her best human friend. Cin knew her too well. “What? Have you seen him? It’s not like I can stop those thoughts once they start.” She would have said more—teasing her friend about her own monster, perhaps—but the lines of exhaustion marking Cin’s face stopped her.

Concerned, Ari popped out of her chair and circled her desk until she was right in front of her. Yep, those circles under her eyes were epic.

Cin looked like she needed to crawl into bed and sleep for a day.

“What’s up?” Ari asked, urging her down into a chair. “You look like you’re about to drop?”

“Nothing.” At Ari’s look, Cin shrugged. “Really, it’s nothing. Weird dreams. I can’t sleep for more than a few hours at a time.”

Not good. Not good at all. Sleep was important. Ari turned into a cranky she-witch when she didn’t get enough.

Okay, wait. That actually wasn’t entirely accurate. Sure, lack of sleep made her cranky, but a shot or two of her honey’s man-juice and her energy levels bounced back up.

Oh, the joys of being a nymph.

Sadly, Cin didn’t have that gift. She was human. She had to deal with sleepless nights like every other human.

“What can I do to help?” She’d make gallons of coffee if that’s what her BFF needed. Gallons.

Man, coffee sounded good right now. Something sweet with a hint of saltiness in it. Or chocolate. She could go for a mocha.

“I dunno. Can you put me in a trance so I can get a good night’s sleep?”

Ari paused her rapturous musings about coffee and frowned. “I don’t know. I’ve never tried. Do you want me to?”

The two women stared at one another. Cin broke first, a tired smile creasing her face. “No. I think I’d rather you didn’t try to bespell my mind with your wicked nymphly ways.”

Snickering, Ari sank down into the chair beside her. “Right. I might make you cluck like a chicken or bark like a dog on accident and then you’d get mad at me and we’d have to have an emotional heart to heart to hash things out so our storyline could move forward.”

“Oh, I was imagining what my life would be like as a sitcom. As the requisite human BFF, you and I would always forgive one another no matter what befell us.”

“Why would your life be a…you know what? Never mind. I’m cool not knowing.”

Ari glanced at her friend out of the corner of her eye. “We have interesting lives. We’d make an awesome sitcom.”

Cin snorted out a laugh. “Yeah, okay. I’ll give you that.”

Settling back, Ari looked out the window to see if she could catch Liam and his green magnificence walking by again. No luck. Darn.

“The monsters would be problematic,” she said after a minute of silence. “Like, could you imagine Vane as anything but a gargoyle? I just…can’t. I can’t see some human actor playing a guy who sleeps all day and goes around scowling and getting frisky with his boo at night.”

Cin’s laughter was lighter than it had been. “We do more than get frisky. And Vane doesn’t scowl all the time.”

“What? We scored a bunch of hotties. We need to own that.”

Cin was fully giggling now and it was just like old times. “We both got crazy lucky, didn’t we?”

It wasn’t. Something bigger than luck had put them on the path they were on now. Fate. Or…something.

“You ever wonder what things would be like if you had never met Liam?”

Ari shook her head. “No. Me and Liam were meant to be. If we hadn’t met in that parking lot, we would have met somewhere else.” She rolled her head again and eyed her best friend. “Same with you and Vane. You two were kinda into each other the first time you met. If it hadn’t been that night, maybe he would have seen you from the tower some other night and things would have gone from there.”

Cin smiled. Some of the exhaustion had fallen away and she looked like she didn’t need a gallon of coffee or a good night’s sleep.

Still, it wouldn’t hurt for her to grab some shut eye before her honey woke for the evening.

“You should catch a nap before Vane wakes.”

Cin’s smile deepened. “Yeah. That sounds like a good idea.” She pushed herself up and paused. “We should do this more often. You know, talk like old times.”

They might have interesting lives, but there would always be time for friends.

Want to see Ari and Cin’s first interaction? Monstrous Tales: The Complete Series gives us their story. (Or grab The Wicked Merman if you prefer to read it as a serial.)