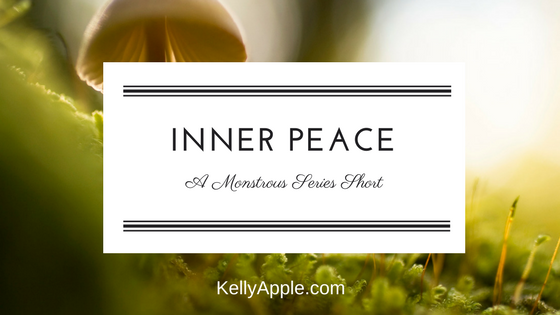 Being alone with Liam was unexpectedly weird.

Not because Ari didn’t enjoy it—BOY, did she enjoy it—but because she kept expecting one of her friends to pop in and interrupt. Every last one of the monsters who lived around their property had been given an eyeful of the two of them engaged in some level of coitus at one time or another.

It was simply something Ari had come to accept as the price they paid for giving her friends sanctuary from the outside world.

When she could run giggling through the trees, her green hunk of a honey hot on her heels, without anyone popping in to make sure she was screaming in delight and not real terror…well, Ari wasn’t used to it.

She kept glancing over her shoulder. She kept bringing the volume of her shrieks down a notch so she wouldn’t bother anyone.

Which was silly. The only ones close enough to be bothered by her and Liam right now were Thisseral and his mate and they were way over at the lake. That was ages away.

Deciding she needed to discuss this with her monster immediately, Ari skidded to a halt next to a large tree and spun to meet the green hunk who filled her days with bliss. Liam snatched her up, arms and tentacles winding around her as only a Guardian could.

“Caught you,” he purred.

Grinning, Ari grabbed his handsome face and smashed her lips to his. It was a hard, ungraceful kiss, but Liam didn’t seem to mind. He responded with gratifying quickness and the before long the kiss had gentled and his tight tentacles loosened enough to stroke over her skin.

“I let you catch me,” Ari told him when they came up for air.

Liam huffed out a breath of laughter. “Did you? Or were you sure you were going to get caught and decided to give yourself up?”

Whatever. Sometimes a nymph had to make things happen if she wanted them done right.

Nuzzling the sensitive spot under his jaw, she grazed her teeth over him as a gentle reminder that getting caught was one of her favorite pastimes. She loved the almost imperceptible shudder that went through her big man’s body whenever her teeth found purchase.

For a solitary species, the Liath Mor certainly had more than a few kinks that could only be fulfilled by having a partner to engage in sexy fun times with.

Her darling monster made her heart sing no matter what they did.

Mmm. Ari loved how Liam’s deep voice rumbled out of him when she was pressed against his chest. It reminded her of other quiet times they’d spent wrapped around one another in bed. Times when they whispered their quiet dreams into the dark and each other.

“I’d forgotten how nice it is to be alone.”

“I know I say this all the time, but we should try to do this more often.” Tilting her chin up, Ari kissed the bottom of Liam’s jaw again. “We should make more time for ourselves.”

They were. Ari knew that. She knew these few precious days would be rare until things out in the world were resolved. When the smaller supernaturals were no longer run out of their homes at the whim of new developers and the more exotic ones no longer had to hide…

Letting out a slow sigh, Ari tucked herself back into Liam’s neck and tightened her arms around him.

It all seemed so…pointless right now. As a community, the supernaturals were waiting to see what happened next. They woke up each morning expecting the worst.

She liked movement and action.

She liked feeling Liam’s muscles bunch and flex beneath her as he carried her through the woods.

Back to the cabin, she presumed. Back to where they could forget for a few more days.

She would find a way to hold onto this feeling, she decided. She’d grab on with both hands and keep it in a stranglehold until the outside world caught up.

When times got tough, she’d drag out this inner peace she’d found to remind herself that it wasn’t all bad.

They had time. They had each other.

They had hours and hours of daylight left to strengthen their bond.

Over and over again, if needed.

Happy with her plan, Ari set her mouth to showing Liam exactly what she expected from the next few hours.

Not surprisingly, Liam didn’t put up even a speck of resistance.

He truly was the monster of her dreams.