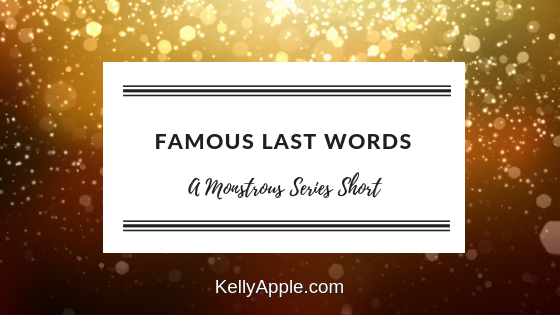 Ari wasn’t sure where things had exactly gone wrong with the evening, but she had a suspicion it had all started when Ella had uttered those famous last words to her yesterday.

What could possibly go wrong, Ari? We’ve got this in the bag.

An innocent question that had unfortunately saddled them with everything and anything of a problematic nature under the sun.

Somehow, Akakios had blundered into the room they were using for storage and shattered an entire crate of moonshine. Liz had burst into tears when she found out and fled the kitchen to hide out in their room.

Jerinth and Amanda had tried to clean things up, but Amanda had tripped over an unbroken bottle and given herself a nasty bump on the head. The medusa had insisted it was nothing, but the way Jerinth had paled when he saw the slow ooze of blood coming out of the shallow cut had Ari ordering them both out of the storage room and back to their cave to rest.

The thought of having to wrangle a massive supernatural snake-man if he fainted had made Ari feel a little light headed herself. Better to send them away before any collapsing happened.

Cin had offered to take over Liz’s kitchen duties until the sweet werewolf was feeling up to returning. Ari honestly thought that would work until she saw the menu Liz had been in the middle of whipping up.

It was…intimidating. Probably beyond delicious, but far too complex for either her or Cin to attempt on their own.

Or even not on their own.

Seriously, Liz could probably be standing over them telling them exactly what to do and they’d still manage to screw up what she had put together.

So they were scrapping the planned menu unless Liz decided to rejoin them and going with finger sandwiches and cut veggies.

The predators in the group would just have to deal.

All that had only been the beginning.

A quick check of the bar and dance floor had shown a massive puddle collecting right in the center of it. Ari had stared in disbelief at that for a solid minute before bellowing for Liam to come take care of things.

It turned out to be a minor issue, not the plumbing nightmare it could have been, which had probably been the only bright spot in the whole cursed day.

Somewhere around midnight, Ella had realized that it was her innocently spoken words that had caused all the mayhem and she’d been a nervous, apologetic wreck ever since. Michael had to drag her outside and talk her down from the brink of a panic attack.

They really had had everything under control. Supernatural-made moonshine and lots of it. Regular alcohol and plenty of snacks to keep everybody going through the evening.

A gorgeous bar. A dance floor Ari wanted to shake her booty on.

IT HAD BEEN UNDER CONTROL.

Then Murphy, that dick, had dropped in and everything had fallen to shit.

“Everything that can go wrong, will.”

There was NOTHING that was going to ruin her planned evening.

This was her night, dammit, and they were going to show all the monsters who had never been in a real bar the time of their lives.

So after shooing everyone but Liam away, Ari rolled up her sleeves and went to work.

This was going to be a night to remember for every one of her friends.

Even if it killed her.