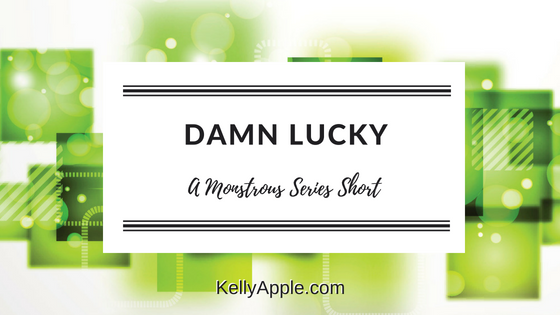 The hyperactive nymph who’d blown into his life with the force of a hurricane and ripped apart his staid existence was a gift he planned on treasuring until the end of his days.

He even loved her when she disrupted the plans he’d made for them with one of her off the wall ideas.

Standing outside the house, Liam crossed his arms over his chest and stared silently at the door that was currently closed and locked.

It was so absurd, he almost laughed.

As if a lock could stop him if he really wanted to get inside. Even if he didn’t have the strength to pull down the reinforced door on his own, he knew other supernatural monsters who did.

A locked door wasn’t going to keep him from his mate.

In the end, it wasn’t the lock that kept him rooted in place. It was the memory of Ari’s slightly naughty smile as she pushed him outside and told him to play with his friends for a while so she could get some work done.

Liam knew his mate. She wasn’t planning on working. She had some scheme percolating in that head of hers. He could hear the low hum of Ari and Ella’s voices through the walls and he caught enough to figure out Ari was planning something for him.

His slilthern perked up in anticipation.

Sending them a stern command to stand down since it was still hours until dark, Liam left Ari to her machinations and went off to do as she said. Find his friends.

It was a strange concept for a species who so often lived alone.

Before Ari, he hadn’t had friends. Nobody he thought he could count on if he needed them, at least. He’d had a mutually beneficial agreement with a band of wood sprites living deeper in the wild patch of land he’d claimed, but that was it.

The trees surrounding him had been closer to friends than any of the monsters living nearby.

Now look at him. He’d inherited Ari’s friends and made some of his own. The tree sprites he’d once had an agreement with had become something more. They looked to him for guidance.

When the hell had that happened?

There were pixies coming out of the woodwork to ask for help and even the rock elementals living in the mountains had reached out and made contact.

Then there were the others. Michael and Vane and Max. Akakios and Jerinth and Lon.

Hell, even the local werewolf Alpha could be considered a friend.

It was strange having so many he knew he could rely on if things turned bad.

Rubbing his chest where a strange feeling had centered, Liam turned the corner and found Michael and Lon staring intently at the guts of Michael’s truck. Ambling up, Liam joined them.

Lon grunted out a hello and Michael gave him a frown. Raising an eyebrow, Liam waited.

“I don’t suppose you know anything about engines,” the werewolf said eventually.

Hardly. Liam tolerated the vehicles because Ari and the others required them. He didn’t like them, though, and tried to stay away from their stink as much as possible.

Shaking his head, he kept a few steps back so he didn’t have to breathe in the oily stench emanating from the metal.

Michael grunted something and stepped back until he was even with Liam. “I’ll have to take it to the pack house and have one of the guys look at it, then.”

Liam didn’t ask what was wrong with it. He wouldn’t understand anything Michael told him anyway, so the words would be wasted.

The sasquatch joined them and they all stared at the metal beast in front of them with varying degrees of disgust.

Finally, Michael sighed and turned away completely. “Ari kick you out of the house?” he asked.

“Yes. She told me to play with my friends.”

Michael laughed. “Really? What’s she doing in there?”

“Plotting something is more like it.” This from Lon, a wide smile on the sasquatch’s face.

Liam considered that. Plotting was accurate. His mate did enjoy trying to put together elaborate schemes. “Your mate is with her,” he told the werewolf.

Michael’s chuckles dried up and he glanced toward the house. “Uhh, maybe we should check on—”

“Arabella and Ella are both smart enough to keep themselves out of trouble.” The sasquatch paused as if thinking about what he’d just said. “Ivy’s not with them, is she?”

Liam hadn’t heard Lon’s mate’s voice, but that didn’t mean she wasn’t there. That female was a quiet one.

At his silence, Lon straightened and looked toward the house. “Perhaps Michael is right. We should check on them and make sure—”

Gods above, maybe they were right. Ari, with her stunning lack of impulse control and her ability to talk normally sane people into doing crazy things, might need some unbiased input into whatever she was planning.

The three of them exchanged glances and started to laugh.

Right. They were acting like their mates were brainless. They weren’t. All of them were more than capable alone of taking on anything that crossed their paths.

Together, they were a godsdamned force of nature.

Ari had told him to spend time with his friends and he was going to do just that.

He was no longer living the solitary existence he’d been trapped in before, after all. He had a mate who loved him and friends who would cheerfully ride into battle at his side.

He was one damn lucky monster.