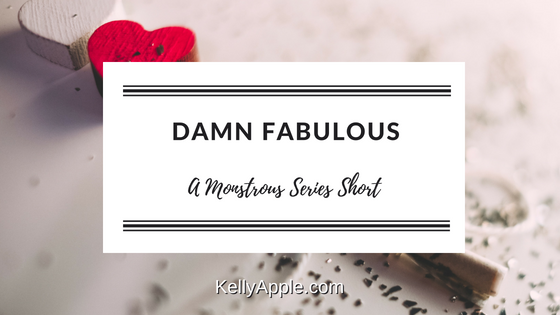 If there was an award for most fabulous nymph, Ari expected she’d win it without even trying.

Wait. Maybe she was being hasty. After all, it wasn’t like she knew any other actual nymphs. Maybe they were all as fabulous as her.

No way were there other nymphs out there rocking the mating thing as well as she did.

Or the friend thing. She absolutely slayed at that.

Yep. Hands down, she’d win most fabulous in a heartbeat.

Feeling empowered, Ari trotted up the stairs to the bedroom she shared with Liam and shut the door firmly behind her.

She needed a few minutes of alone time and the best way to get that was to lock herself in her room.

Everyone living in the house knew what the closed bedroom door meant.

Too bad Liam wasn’t around to make what everyone was thinking reality.

Nope. She wasn’t going to dwell. Her fabulousness was at an all-time high and she was damn well going to bask in it until the next great moment came along.

Unable to stand still, Ari shimmied in place as she surveyed the room trying to figure out where to put her surprise.

The bed was the most obvious, it being front and center and all, but…that felt too easy. Like, why be obvious? She needed to put some thought into this. Really show Liam she wasn’t afraid to get her hands dirty on the heavy planning.

Dresser? Possibly. Except, would Liam even look there?

On the other hand, it provided a nice, flat surface that would keep her gift from tumbling over and making a mess.

Their room didn’t have a lot of other options. Liam needed only the basics—he’d been living in a cave before they’d met, for goodness sake, and was used to only the bare essentials—so a bed, the dresser, and the massive chair he sometimes used for reading were her only options.

Okay. Think creatively. If the she wasn’t going to consider the bed and the dresser was out, that left, well, the floor.

She could put down one of the blankets the wolves had given them, arrange some pillows, and create an indoor picnic for the two of them.

After all, it wasn’t every day a nymph and her mate celebrated the anniversary of the day they met.

Excitement zinging through her, Ari carefully placed her surprise on the dresser and went to go find a blanket. And water. Liam liked staying hydrated. Especially if things were to turn sexy.

Stamina, thy name is Liam.

Ooh. She should grab some of those nut cakes he liked. The chewy, savory ones he’d been showing Ivy how to make. Those Liath Mor sure did like those things.

Liam said they were great for keeping up a monster’s energy.

Yes. She was definitely bringing up a few of those.

Uggh. Maybe she should have sweet talked Liz into making some special ones instead of going the route she went. She knew Liam liked them, she had no clue if he’d care for her surprise.

No. Stop. That was way too negative for today.

Liam would love her surprise. He loved everything she did.

Gods above, she was one lucky nymph. The day Liam had abducted her from that parking lot had been the best damn day of her life.

Just look at her now. Mated, friends with a slew of awesome supernaturals, and so goddamn fabulous it almost hurt.

Locking herself in the room again with her loot, Ari grinned as she worked on setting everything up.

Yeah, if the supernatural world ever wanted to award anyone for being a damn fabulous nymph, she’d definitely win. It didn’t even matter if other nymphs rocked it as well as she did.

She was Arabella Effing Colton.

And she was damn fabulous.

And tonight, she was going to lavish love on her mate for nabbing her from that parking lot and opening her eyes to this crazy, insane, perfect world she was part of now.

Want to see how Ari first met Liam? Monstrous Tales: The Complete Series gives us their story. (Or grab The Wicked Woods if you prefer to read it as a serial.)