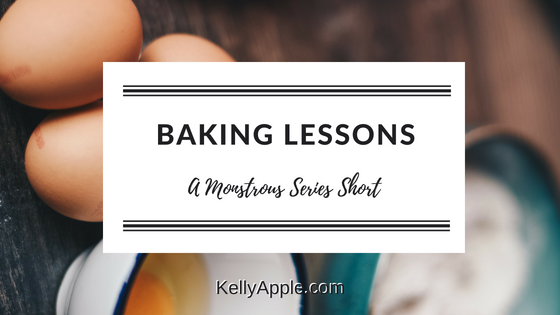 “How hard can it be, Cin? I mean, we have a recipe to follow. It’s not like we’re free-balling this.”

Cin rubbed the bridge of her nose and tried mightily not to roll her eyes at her best friend. Ari was awesome at a lot of things, but baking wasn’t one of them. Having a recipe to follow didn’t change that.

“I’m just saying, maybe we should wait until Liz gets back to start.” If Liz got back. She and Akakios had disappeared a while ago and they were nearly as notorious as Ari and her man when it came to how long they spent locked behind closed doors.

Ari didn’t bother trying to conceal her eye-roll. “They’re muffins. We’re not trying to defuse a bomb. If Liz didn’t want us making them, she wouldn’t have left the cookbook open for us.”

It was classic Ari-logic and Cin honestly had no defense against it.

Liz knew Ari. She really shouldn’t have left something as tempting as a cookbook out when Ari was around.

In Liz’s defense, her nymphly friend didn’t usually get it in her head to bake, but Ari had been looking for excuses to avoid work lately and the pictures of fluffy, light muffins had been too much for her to resist.

The recipe wasn’t even that complicated. They needed to mix some dry ingredients first. Mash some bananas and add a few extras. Combine everything together and pour into the muffin tins.

For most people, maybe. By the way Ari was scowling down at the measuring spoons, though, this wasn’t going to end well.

“Liz will be back soon. We should just—” Cin stopped talking when Ari shoved a measuring cup into the flour canister and brought out an overflowing cupful.

It was like watching a train wreck. Ari cheerfully dumped the flour into a bowl and scooped another one. She didn’t level it off or do anything remotely resembling checking to make sure she had an accurate amount.

Flour puffed up in a white cloud every time she shoved the measuring cup into the canister for more. Cin could practically feel it adhering to her hair and skin.

“Are we doubling the recipe? Those werewolves eat a lot.” Another two scoops and Ari’s eyes went comically wide as she giggled. “Whoops. Looks like we’re doubling it now.”

If Ari wasn’t her best friend, Cin would be cringing.

Scratch that. She was cringing. In fact, cringing was the only thing Cin could do.

There was just so much flour. Everywhere. Ari was starting to look a little ghostly.

They really should have assembled all the ingredients before starting. Not that Cin didn’t think they had everything the recipe called for, but it was better to be safe than realize you were out of salt at the last minute.

“Am I supposed to mix the ingredients in the same order they’re in the recipe?”

Cin started laughing. She couldn’t help it. Ari was a wonderful person with plenty of stellar qualities, but she sucked at baking.

“You need to read the directions at the bottom,” she got out between snorts of laughter. “It’ll tell you how to combine everything.”

“Right.” Ari gave her a serious look that was completely ruined by the flour dusting both cheeks. “I knew that.”

Then her best friend proceeded to scoop out cupfuls of sugar with the same casual disregard she’d given the flour.

Man, Liz really needed to finish up with her minotaur if she hoped to have any chance of salvaging this recipe.

A overfull teaspoon full of baking soda later—found in the cabinet with the other baking goods, Cin had been pleased to discover—and Cin revised that thought.

These muffins were shot. They should just throw away Ari’s measuring attempts and start over.

“Here.” A bunch of browned bananas were thrust in Cin’s direction. “The recipe says we need to mash these.”

Cin took the bananas and went in search of a bowl. She could stop Ari—maybe—but Ari was enjoying herself. It had been a while since her friend had looked so carefree.

Making a batch of muffins that would probably be inedible was a small enough price to pay for that.

Besides, if Liz allowed her back into the kitchen after this, Cin would help the quiet werewolf with the next batch. Preferably with Ari somewhere else.

Maybe she could ask Liam to take her somewhere private to keep her occupied while they were making them.

Another round of laughter shook Cin’s shoulders. Yeah, that would work. Ari was physically incapable of denying her mate when he got a certain look in his eye.

Cin knew how that was. Her honey might not get all handsy and tentacle-y, but she had a hard time saying no to Vane when he reached for her.

And, really, why would she want to?

A sexy, ripped, stone supernatural with abs that went on forever wasn’t something any red-blooded woman would turn down.

Okay, maybe some women would, but not Cin.

Nope. She adored her mate and loved when he went all fierce and focused.

Cin jerked herself back to the present and found Ari staring into the bowl with a chagrined look on her face. Her friend looked at her and sort of tilted her head, reminding Cin of a naughty puppy trying to get out of punishment.

“Maybe they won’t notice all the extra salt.”

They were supernaturals after all, and all their senses were heightened. But they’d choke down the muffins anyway because they all loved Ari stupid amounts and wouldn’t want to hurt her feelings.

Sometimes you had to make sacrifices for friendship.

Eating crappy muffins didn’t seem like that big of one in the grand scheme of things.

Nudging Ari out of the way with her hip, Cin tried to salvage Ari’s disaster in the making.