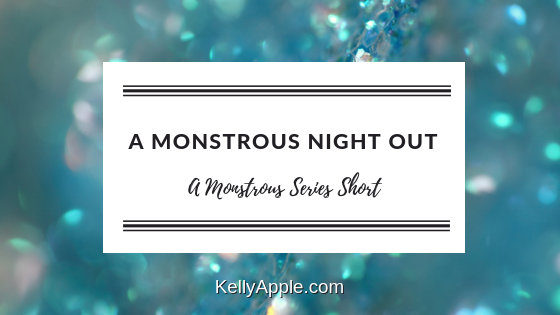 A Monstrous Night Out
Ari
Monstrous

“Okay. So obviously we can’t go out to a regular bar, but we can make our own bar here. In the house.” Ari pointedly ignored the way Siri’s head popped up and her eyes went wide with excitement. She had a well thought out speech put together to convince her friends this was a great idea. She was determined to get through that before Siri started making suggestions. “Liam and Jerinth are putting together the actual bar. The rest will be a piece of cake.”

Siri started bouncing, her bikini top threatening to lose the fight against gravity.

Ari blinked and focused on Liz who was, as usual, hovering near the kitchen door. “Liz, if you wouldn’t mind being in charge of the snacks, that would be great.” At the shy werewolf’s nod, Ari beamed. “Outstanding. Ella and I will work on logistics. If anyone has anything on their calendar they can’t reschedule, make sure you let us know. If you don’t speak up, I expect you here.”

Here and partying their asses off.

“Siri, could you get me your friend Luz’s number? I want to see if I can buy some of that wicked moonshine from her.” Oh, that moonshine. Ari wouldn’t soon forget the hangover it had given her. She’d just have to watch how much of that devil brew she drank.

A phone was thrust into her face without warning and Ari took a stumbling step back.

Siri waved the phone around like a madwoman. “Luz’s number.”

Right. The half-dragon wasn’t a procrastinator. Good to know.

Siri leaned in, getting uncomfortably close. “You know I work at a bar, right? I can totally help with this.”

Ella snorted. “Of course, she knows you work at a bar. She went there with Cin a few times to meet you. Remember?”

There was a hint of sadness in Ella’s voice. Like maybe she wanted to see what all the fuss was about.

Which was exactly why Ari had decided they were going to make a damn bar in the house. Liam kept calling it her speakeasy, but that made zero sense to Ari to she ignored it.

Okay. Maybe she’d revise her plan. A girls’ night sounded fun, but she might have to recruit a few of the guys to help with the background stuff.

And if she was going to recruit a few, she really needed to invite them all. Because they were awesome and fun and she loved watching them trying to be social.

Grinning as maniacally as Siri, Ari found some paper and started a list of things she needed to get together before the big night.

Food? Check. She’d coordinate with Liz and have her get her a list of things they needed. Which didn’t mean the werewolf was going to get to hide in the kitchen all night, either. This was going to be one of those bars where the food was of the serve yourself variety.

Music? She’d work on that. If Michael or one of the other guys wasn’t interested, she’d see if one of his werewolf buddies from the pack house could help out.

Actual physical bar? Being built as she wrote. Well, being planned. Whatever. Liam and Jerinth would get that done with plenty of time to spare.

Dance floor? Anything could be a dance floor. Hell, they could set up a dance area outside.

Huh. That would rock, actually. Dancing under the stars, moonshine in one hand, her darling man wrapped around her as they swayed to the beat of whatever was pounding through the air.

Could Liam even dance? She’d never asked and the opportunity to see firsthand had never come up.

She’d have to find out.

Feeling even more confident about the fantasticness of this idea, Ari looked up from her notes and pinned her friends with a look.

“Okay, ladies. I’ve decided we’re going to invite the guys and make this a thing. Ella, get the word out. Cin can help.” Cin would love helping plan this. “For the first bar night, we’re going to keep it on the smaller side. Us and our mates. If it works, we’ll start planning something bigger for others in the community.”

Gawd, she loved that idea.

A monstrous night out. Her, her honey, her girls, and their mates to start, the monstrous community later.

These types of things didn’t plan themselves, you know.

Want to see how Ari first got involved with the supernatural community? Monstrous Tales: The Complete Series started her story. (Or grab The Wicked Woods if you prefer to read it as a serial.)