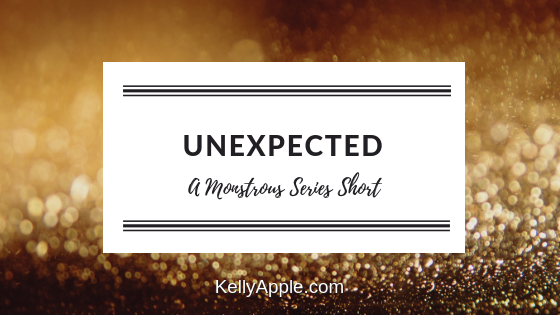 Ari didn’t quite know what to think of her party.

Despite the setbacks, things were fine. Better than fine, really. They were going great.

The puddle in the middle of the dance floor was gone. The lack of moonshine didn’t seem to be inhibiting any the guests. The various supernaturals who’d shown up were all behaving, even those she hadn’t personally invited.

Ari kept expecting something to happen to make everything fall apart.

Casting her steely eyed glare in her friends’ direction, she saw Akakios standing stock still against the wall. He’d been so terribly apologetic about the accident that had caused the loss of their moonshine stores, she kind of understood why he looked like he’d rooted himself in place. Liz had cried when she’d seen the accidental mess and Akakios hated when his mate cried.

So now he was standing as still as a statue, his little mate hovering beside him, her cautious gaze darting around the room with something akin to confused horror.

The party was going great. Liz had managed to make a huge chunk of the food she’d been planning for the menu after her cry.

Ari just couldn’t figure out why everyone had shown up in costume.

This wasn’t a Halloween party.

Well, it was now, but that hadn’t been how she’d intended it.

But people had started arriving wearing capes and plastic fangs and fake werewolf heads and Ari honestly didn’t know what to do about it.

Three of Michael’s werewolf friends had coaxed Lon and Ivy into playing a cake walk game. Ari couldn’t figure out where they’d gotten the cake they were holding up as the prize.

A flash of pink caught her eye and Ari frowned harder. Okay, so they’d gone to Hobbs’ Bakery (the BEST bakery, in Ari’s humble opinion) and brought their own cake.

That was nice of them.

A little weird, really, but nice.

A lanky form draped in sheet, the eye holes focused forward, walked past and Ari tracked it until it joined Luz and her small group of friends.

Okay. Right. Not what she’d intended, but it worked.

With the exception of Cin, everybody in this room was a supernatural, it seemed redundant to dress up as a different type of supernatural.

But here they were.

And they looked like they were having a great time.

Blowing out a breath, Ari scanned the room for her mate. He’d disappeared not too long ago and she wanted to make sure he was doing okay with all these people hanging around.

Her Liam was a solitary creature normally. He put up with her need to have others around, but his default setting wasn’t surrounded by individuals he didn’t know.

The warm, comforting pressure of a tentacle coiled around her wrist a moment before Liam’s big body stepped into hers and Ari felt her tension leech away.

“This is an interesting party, love,” her darling man murmured in her ear.

Interesting was definitely the right word.

“Everybody’s dressed up,” she said in a stage whisper. “I feel like I missed something.”

“They all seem to be having fun.” Liam tilted her chin up so he could see her face. “Are you?”

Was she? Yeah. Maybe.

The DJ Siri had recommended started playing Monster Mash and everybody on the dance floor threw up their hands and made a weirdly synced Whoo-Hoo-ing sound.

It was hilarious, actually.

Monsters—actual, honest to god monsters—were grooving on her dance floor while dressed up as other monsters.

“I’m having a great time,” she said honestly.

It was bizarre. It wasn’t what she’d intended when she planned everything out, but it was fun. Well, it was funny.

So what if they weren’t serving ridiculously potent moonshine. So what if everyone came in costume.

She’d seen more than a few couples disappear into the shadows. She’d heard a few gasps and moans that had nothing to do with the wildly gyrating bodies on the dance floor.

She was a matchmaking nymph. That sort of stuff was her bread and butter.

So, yeah. She was having a great time.

She’d accomplished what she set out to do. She’d given her friends a night to remember.

Her gaze slid to Akakios and Liz who were still standing pressed against the wall.

Now she just had to drag the last reluctant few into the circle of fun.

Sending a sassy smile to her beloved, Ari laced her fingers with him and made her determined way to were the minotaur and his mate were trying to blend in with the wall.

It was type to turn her nymphly charms on and really get this party started.