Did you like Jenny’s thankful list yesterday? Here’s a secret for you: I have a another set of books planned in that world. It might take a while before you see them, but Jenny, Evan, and the gang will return again. *fist pump*

But let’s talk about today’s Slice of Life story, shall we? Bas, the badass demon who loves his broken werewolf mate something fierce, is on tap. As it turns out, he’s a little befuddled by the Thanksgiving traditions, but he’s willing to try them out if it makes his lady happy. 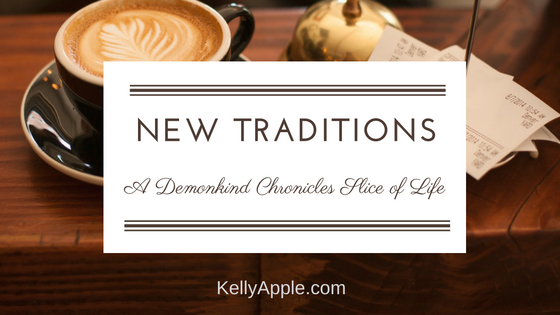 Bas read over the written instructions Jazz had left him before dragging Evie and Arix out on some mysterious errand. He might find Evie’s sister to be annoyingly blunt at times, but she’d made Evie light up when she suggested starting a Thanksgiving tradition in their new home.

She might be irritating, but she made Evie happy and that was what mattered to Bas.

Her instructions, however, were pure gibberish.

What in the seven hells was a turkey?

He knew what potatoes were, but stuffing was a new one. And mashing the potatoes stymied him. What was the purpose of mashing them? They were perfectly good fried up. He’d baked one for Evie recently after she’d shyly asked him to, but the taste had been bland to him.

Scratching his head, he looked at the last item on the list.

Bake pumpkin pie — TRY TO FIND WHIPPED CREAM TO GO WITH THE PIE!!!

Apparently the whipped cream was important seeing as how it warranted three exclamation points.

If Evie hadn’t been looking forward to this meal, Bas would chuck Jazz’s list in the bin and make something else. Instead, he went over the verbal instructions Jazz had flung at him as she dragged the others out the door.

“The bird has to be juicy on the inside, but crisp outside. Don’t get fancy. Just cook it and move on.”

So the turkey was a bird. Fine. Arix had caught a brace of water fowl yesterday. He’d use one of those. Maybe two, seeing as they were on the smaller side.

She’d actually explained what stuffing was and he understood the concept of mashing the potatoes, he just didn’t see much point.

Now what had she said about the pie? “Do not fuck this up, Bas. I’m looking forward to some goddamn pie.”

Scowling, he dug through a cabinet he hadn’t been in since his release from the magical prison he’d been held in on the mortal plane. His old housekeeper had left him a sheath of recipes for the next person he hired into her position. Bas had never hired anyone, but he vaguely recalled her making pies on occasion.

All things considered, it was the best he could do.

As he worked on putting this new tradition together, he wondered if his Evie would like it. He hoped so.

His little werewolf deserved so much more than she’d been given. If he could keep the happy light in her eyes for another day, all the cursing and growling he was doing at the potatoes would be worth it.

Hell, Evie was worth any amount of effort.

There you have it. One slightly grumpy demon trying to make a new tradition for his lady.