Posted May 8, 2018 by Kelly Apple in Monstrous Matchmaker, Snippets / 0 Comments 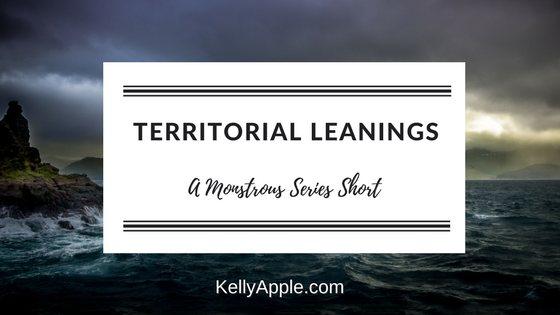 Ever since he’d realized Io was carrying his offspring, Thisseral had become territorial.

Not that he wasn’t normally—his lake was his and he wasn’t about to share it with anyone who wasn’t a mate or ally—but knowing he had a breeding mate and a youngling to protect brought out his darker side.

Prowling the edges of the lake, Thisseral hissed at the shadows along the shoreline in warning.

His sharp ears caught the rapid heartbeat of a small prey animal and he relaxed minutely. The small woodland creatures couldn’t hurt him. Not while he was in the water. Probably not when he was out, either.

They were mostly small and fuzzy and lacked the tearing teeth to truly hurt one of his kind.

If he’d been nearer a larger body of water he might think differently, but up here, so far from the oceans, he felt safe enough from what roamed the wood.

The faint thrum of a song reached his ears and Thisseral abandoned his scouting to go check on his mate.

As he expected, Io was in her favorite cavern below the cliff. The entrance was below the waterline and hard to find—hidden enough even a breeding female could feel safe from unwanted eyes.

She had pulled herself onto the rocks above the water and sat caressing the slight swell of her belly, her sweet gaze focused on him as he breached the surface.

Every time he saw her, Thisseral marveled anew that this beautiful creature had chosen him as a mate.

Tonight, her skin glowed the pearlescent blue of a rare underwater gem. She’d been out of the water long enough for her hair to dry and it coiled like a dark blue sheet down her back.

Her beauty stunned him. The first time he’d laid eyes on her, he’d known she was his.

They were as different as night and day, he and his nixie. The paleness of their skin and dark hair were the only similarities. Where she glowed like a living blue flame of water, he was white and black. White skin, black hair, eyes that looked like the darkest parts of his watery domain.

Yet, they were compatible.

Propelling himself forward, Thisseral let his gaze drop from his mate’s luminous beauty to the small, hard bump of her belly.

His child grew within her. His young.

One that he and Io had made during one of their frantic couplings in the first days of their mating.

Awed, he let his webbed fingers feather over the mound and felt the pulse of life within when the young kicked.

Io’s laugh was soft and low. “Strong every night.”

He knew. He’d been woken up many times by the hard jab of a foot or fin. It was as if the young inside wanted Io for itself.

Water-folk were territorial, after all.

“Did you rest, love?” Her pregnancy had caused some difficulties in the early days when she’d been uncomfortable out of the water.

Nixie preferred sleeping on land while his kind couldn’t leave the water. It had taken some trial and error before they’d found a solution that worked for them.

The heavy netting Io tangled herself in so she could remain in the water while sleeping was anchored to one of the large rocks below the shelf she reclined on now. It turned out nixie didn’t so much prefer dry land, as keeping their heads above water while they slept.

The netting allowed him to coil about her in their sleep—offering him peace of mind—while giving her the illusion she was still on land.

It was unconventional, perhaps, but it worked for them.

Ari had taught him the joy of compromise on that long ago evening when she’d wandered into his lake.

Pushing aside thoughts of the pretty nymph, Thisseral let his fingers skate over his mate’s cool skin until he could stroke her cheek.

She’d been a revelation when they surfaced from the mating frenzy long enough to begin to learn about one another. She loved touch. He hadn’t known how much he enjoyed touching until there was someone there who practically begged for it.

Io took every opportunity to stroke his gills, his tail, the sensitive line along his hip. She delighted in it.

It hadn’t taken long until he was as addicted to her caresses as she was to his.

Tail floating behind him, Thisseral heaved himself up until he was partially on her rock. It wasn’t the most comfortable position—anything outside the water took getting used to for a merman—but he wanted to lay his head against her thigh and this was the most expedient way.

Her skin was cool beneath his cheek. She made a low thrumming sound in the back of her throat—the same sound that had alerted him that she was awake earlier—and gently pushed the long, dark strands of his hair back until his face was entirely uncovered.

“Are you happy, beloved?” she asked, her voice full of song.

“Yes.” A simple answer that barely scratched the surface of his joy.

Before Io, he’d been alone. He’d explored his mountain home. He’d thought about traveling through the underwater tunnels. He’d listened to the wind and the waves and stayed in his tiny corner of the world.

Then he’d met her and been reminded there was more to life than years upon years of solitude.

Ari had woken him up, but Io had given him purpose. Love. The drive to protect and defend.

On her last visit, Ari had told him she was building him a lake down where she lived. Her mate had grudgingly told him there was a vast, underground water system he would have access to if he and Io decided to join them below.

Thisseral had only grinned at Liam until the Liath Mor had turned away with a rumbled growl.

He did enjoy needling the big Guardian with his knowing smile.

But the nymph’s and Guardian’s words had stuck with him.

Ari had woken him up and now she was making a place for him to raise his young.

There was safety in numbers and he wouldn’t turn aside any help when it came to protecting his young and mate.

He could even learn to stop poking at Ari’s mate. Eventually. With enough time and patience.

For now, he would marvel at his mate’s pregnancy and changes in her beautiful body.

Tomorrow, he could plan for the future he could feel coming.

Want to see how Thisseral and Io’s story began? Monstrous Matchmaker: The Complete Series is the beginning of their romance. (Or grab Operation Merman if you prefer to read it as a serial.)