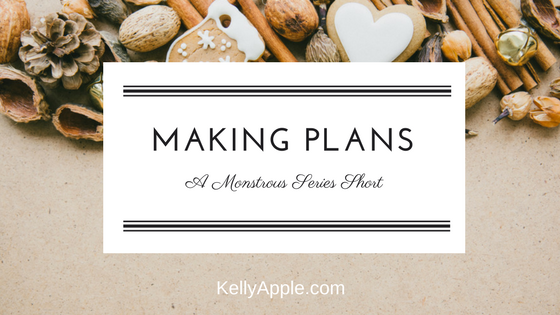 Liam’s words came out so flatly, Ari had to purse her lips and look up at the ceiling to keep from bursting into laughter. When she had herself marginally under control, she nodded. She would have tried to explain her request, but she didn’t think she’d get very far into her explanation before she started giggling.

“Arabella,” her green love said patiently, “as you are well aware, I cannot pass as human. We can’t simply drive over to the nearest bed and breakfast and get a room.”

Aww, her poor sweetie pie. He never got a chance to cut loose and do fun things.

Heck, she didn’t get much of a chance either anymore. Their last date night had been derailed when a clan of pixies showed up seeking sanctuary after their previous territory had been overrun.

Which was why her idea was so brilliant.

Eyes shining, she leaned over and smacked a kiss against Liam’s mouth. “I wasn’t planning on stopping into a bed and breakfast, sweet pea.”

His brow creased at her cutesy nickname and one eyebrow went up with glacial slowness.

Not the least deterred by his intimidating scowl, Ari plopped herself on his lap and cuddled up to her big, green monster. “I was thinking we could head up to the Cin’s parent’s cabin. We could visit Thisseral and Io. See how their little mer-nugget is doing. Have fun. You know, have a few days away from all the craziness going on here.”

Liam’s arms wrapped around her and he rested his chin on her head. His silence went on so long that Ari had just opened her mouth to try to convince him again when he spoke. “A break might do us good.”

Wriggling, Ari bounced around until she was straddling her honey’s lap, his gorgeous face all she could see. “Really? You mean it? Oh, baby. Thank you!”

The slight quirk of his beautiful lips told Ari he was already working out the logistics in his head. Brilliant, handsome monster.

For once, though, she’d already done her own planning.

“Michael can have the van over here within the hour,” she told him. “Cin dropped off the keys to the cabin last night. I stocked up on food for us yesterday. [harpy and lady] will cover the business stuff.”

Pressing another kiss to his mouth, Ari hugged him tight before bounding off to find her phone. Her favorite werewolf should be waiting for her call. Once he got here with the van, their vacation would begin!

All but squealing with delight, Ari dashed to throw a few pieces of clothing into a bag. While she didn’t think she’d be wearing much (if anything) during their alone time, it always paid to be prepared.

You never knew what sort of craziness life could throw at a person, after all.