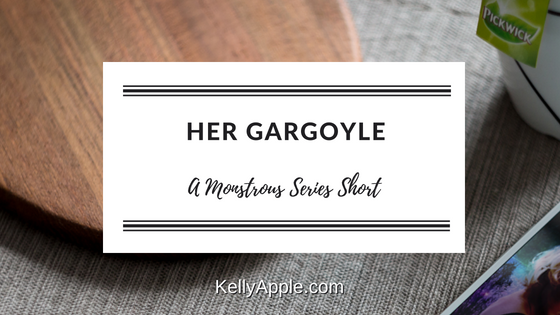 In the grand scheme of things, finding a job after graduation was…well, it wasn’t really on Cin’s list of Things That Were Important.

That was probably the wrong attitude to have, but there was so much more to focus on than her future that….

Well, shit. If Vane heard her talking like that, he’d get that disappointed look on his face, wouldn’t he?

It was the idea of getting a mundane job in the mundane world that made her cringe a little inside.

Her world had opened up when Ari had introduced her to the monsters living around them. It still boggled Cin that there had been all these beautiful, wondrous creatures living under her nose that she hadn’t known about.

That she’d found her prince in one of them stunned her even more.

Her monster. Her love. Her gargoyle.

Vane was everything she’d been searching for since she first discovered boys. She’d had relationships with women in between the boys (well, A woman, but still) and she’d still been left feeling like the thing she was looking for was just out of reach.

Her gargoyle had changed that. He was grouchy and grumbly and his waking hours were terrible, but he filled that hollow place inside her she’d begun to think would forever remain empty.

If Ari had been here, she would have gotten a kick out of Cin’s line of thinking. Her nymphly friend could turn pretty much anything into innuendo and Cin thoughts had sounded dirty even to her.

Which hadn’t been her intention.

Chortling to herself, Cin glanced at Vane where he perched in his usual place by the wide window. Even though she knew he wouldn’t wake up if she was too loud, it was second nature to make sure she wasn’t disturbing him. Or anybody else, really.

But no. Her stone darling was still crouched as he had been, his wings partially flared as he stared at the shutters blocking the view of the forest beyond.

The shutters had been Ari’s idea. She’d pointed out—rightly so—that Cin needed a safe place to sleep if she was going to be staying up in Vane’s perch. Vane had growled a little—a very little—before relenting.

Cin knew he didn’t like to feel penned in, but he’d acquiesced for her.

It did make her feel safer when she could lock herself in with her man during the daylight hours. And the shutters kept the sun out which was crucial if she wanted to get enough sleep so she could keep up with her love once night fell.

Plus, when they were closed and latched, they made Cin think she and Vane were in this cozy little bubble.

That thought always put a smile on her face.

She loved spending time with her man. Even if she was studying while he was locked in his daylight slumber, just being around him soothed her nerves.

With Vane around, she was invincible.

Not in a physical sense, but…Shit. With Vane in her corner, she could do anything.

She and Ari had figured out how to swap their class schedules around so they could take a mix of online courses and late afternoon classes, which left all her evening hours free to spend with her man.

A year ago, figuring out something like that would have seemed far too complicated and she likely would have given up without succeeding.

Ari changed that. When Ari spilled the beans about the monsters and dragged her into their group, Cin suddenly had a purpose. Finding Vane and realizing they had something between them had only made her focus laser sharp.

That brought Cin around full circle and she stared at the banner at the top of the school website telling her about an upcoming job fair.

While she might have focus about plenty of things, the job thing made her feel vaguely nauseous.

The world was too damn big for her to worry about what she wanted to do after she got her degree.

The monsters were poised on the verge of coming out. Or being revealed. Or however you wanted to look at it.

Ari was right there with them. She was running herself ragged trying o figure out how to keep herself and all her friends safe.

And what was Cin doing? Actively working on avoiding whatever the future had in store for her, was what.

Closing her laptop, Cin flopped over onto her back and looked at the gorgeous line of her man’s back. She wished Vane was awake now. If he was, she could tell him all the things that were bothering her.

Uggh. So much was bothering her.

Lon had been mumbling to himself the other day about how gargoyles weren’t always bound by daylight. Wouldn’t that be nice? Having Vane here. Now. Man, she’d do a lot to make that a reality.

Closing her eyes, Cin tried to imagine the things they could do. Snuggle more. Cuddle more. Do other physical things more. Not that they needed more there. Vane was very satisfying no matter whether their time was abbreviated or not.

A laugh burbled out of her.

Heck. If Vane was any more satisfying, she probably would have trouble walking normally.

Her gargoyle was hung.

He knew magic, for goodness sake.

He’d admitted that he only remembered a small portion of what gargoyles had once been able to wield. Meaning there had once been a whole lot more out there.

Cin was mated to one of the few beings on the planet still capable of conjuring true magic.

And in two hours, when the sun went down, they could be legendary together.

Content with the thought, Cin settled in to wait out the sunset. For her honey, she’d endure anything. Even a few mindless hours staring at his gorgeous body.

Oh, the sacrifices she made.

Want to see how Vane and Cin finally find one another? Monstrous Matchmaker: The Complete Series gives us their story. (Or grab Operation Gargoyle if you prefer to read it as a serial.)