Posted May 22, 2018 by Kelly Apple in Monstrous Matchmaker, Snippets / 3 Comments 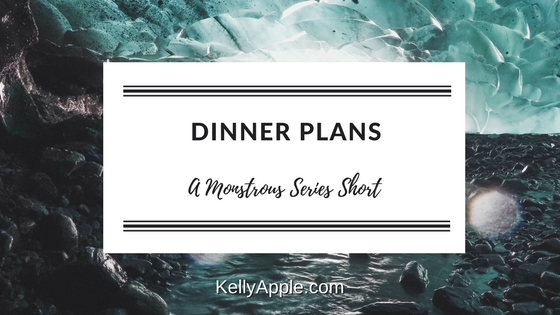 “My dad wants to get together for dinner next week.”

Max froze at Siri’s brightly chirped statement, his belly filling with dread. It took several moments for his muscles to unlock so he could turn casually in his mate’s direction.

Does he? He thought he sounded as calm as a dragon faced with the specter of a disapproving father could.

His mate’s sire really didn’t care for him.

He never did anything that overtly hinted at that, but a dragon as old as Max knew these sorts of things.

And therein lay the heart of the issue.

His age. Compared to him, Siri was a babe barely out of the cradle. For all she was a fully grown female, he had centuries on her and it made her father wary.

“Yep. He’s reserved the big hall at the complex. We can all shift and do the beastly thing.” Siri’s expression went blank for half a second. “Although if we shift, that means we’ll be eating raw. Blech. Maybe I can talk him into doing it in our human forms.”

Unlike Siri and her family, Max didn’t have a human form. He was all dragon, all the time.

It made things difficult when interacting with others upon occasion. Although Ari and the others he’d met through her didn’t seem to mind figuring out how to fit the bulk of him into wherever they were gathering.

I’m sure your father will make allowances for you lack of love for raw meat, he told Siri.

She flashed her bright smile at him and went up on her tiptoes to buss a kiss against his snout. “That’s nice of you to say, but you’ve met my father. When he’s in his cockatrice form, he thinks all things should be devoured raw.”

Possibly the only thing Max and her father agreed on.

The difference being that Max took pains to make sure Siri had options whereas her father simply told her to suck it up and deal with it like the monster she was.

Chuffing out a hard snort, Max curled a claw around his mate’s hip.

As usual, Siri was dressed in low slung cut-off shorts, the denim so short only the ragged fringe kept her ass cheeks from showing. Her boots had been kicked off when they arrived at the grotto and lay in a heap with her cowboy hat.

Craning his neck, he peered down her skimpy shirt as he drew gentle circles on her skin with the tips of his claws.

“Are you looking down my shirt, you perv?”

Of course. He always would. His mate’s body was a delightful wonderland he would never grow tired of.

Her words should have warned him, but when she flipped the bottom of her halter top up to reveal her rounded breasts, Max’s heart stuttered in his chest.

Good gods, his mate was a firecracker.

Firm, dusky nipples stood at attention and he stared at them hungrily until she tugged her shirt back down with a laugh.

Dazed, Max followed her to the edge of the water, salivating as she stripped off her shorts and tiny panties. Her distracting shirt followed and soon she was as naked as the day she was born.

Naked and perfect and…sliding into her cockatrice shape even as she threw a sultry glance over her shoulder.

Huffing out a silent laugh, Max watched her human skin become cream and brown feathers. Her tail curled toward him even as the rest of her body continued to shift.

Without blinking, he slid his tail against hers, loving the downy feel of her feathers giving way to scales that mirrored his own.

He’d been lucky the day Siri had shown up on Ari’s doorstep asking for the nymph’s help in finding a mate. If she hadn’t, Max would still be alone and lonely in his mountain home.

Unable to resist the lure of his mate’s monstrous form, Max sidled closer until he could butt his head under her chin and nuzzle her affectionately. She stroked her head against his, the downy feathers of her crest caressing his scales like hundreds of gentle fingers.

It’s so weird to shift outside, she said quietly in her mental voice.

It’s safe, love. You know I wouldn’t suggest it otherwise.

Another sweet, slow stroke of her head. I know. It just takes getting used to.

Max could understand that. Her monstrous form was rare enough that until recently, she’d only ever shifted in enclosed areas so no one would be tempted to take her and her family as trophies.

Thoughts of her family had him wondering if her father and mother ever dared shift outdoors. He should extend the offer. Ari and Liam likely wouldn’t mind loaning them the grotto for an evening.

He’d do it. Perhaps at the dinner Siri’s father was planning.

They could gather and shift and maybe—just maybe—her father would stop seeing him as a lecherous old dragon and instead see that he loved Siri to distraction and would always put her own needs above his.

Tell your father, he said even as he continued to nuzzle her, we’d be happy to have dinner with him.

Eyes shining, Siri bumped her shoulder against him and preened her wings. You’re the best, baby. I’ll call him once we get back to the house.

That taken care of, Max banished all thoughts of her father and focused on the beautiful, winged form of his mate.

He wasn’t letting all this beauty go untended. Not tonight.

Want to see how Max and Siri met? Monstrous Matchmaker: The Complete Series has their story. (Or grab Operation Dragon if you prefer to read it as a serial.)