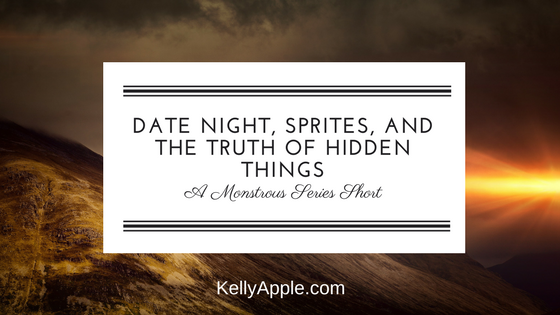 Setting the last of the pillows against the weathered stone bench, Liam stood back and looked over the cave with a critical eye. His old pallet had been replaced by a thin camping mattress—still far more comfortable than his old straw stuffed blanket had been—and pillows were strategically placed throughout.

As much as Liam sometimes longed for the old days when he lived alone in his cave and wasn’t tripping over a new supernatural Ari had dragged into the house to help, he found he liked the comfort that came with pillows and mattresses.

They helped keep him from scraping his knees to hell and back on his dates with his mate, after all.

With the things he had planned for tonight’s date, little considerations like that mattered.

Unable to stop his smile at the thought of having his nymph all to himself for the evening, Liam checked that the water he’d collected from the grotto was securely capped and put away. He’d made some of the chewy cakes he liked and brought nuts and berries down from the house.

Both he and Ari were going to need to stay fortified in order to work through the list of things he intended to do to her.

Hydration and food were a must.

He ran through his mental list one last time and nodded. He’d told all their supernatural friends what he had planned and warned them away from the cave. He’d stashed away enough food and water to last the night. He’d added blankets and pillows to the normally Spartan cave to make it comfortably homey.

Now he only had to collect his mate and date night could begin.

An unexpected flash in the corner of the cave caught his eye. Curious, Liam went toward it and found the tiniest sprite he’d ever seen cowering against the wall.

Her size indicated she was little more than a child, but Liam approached her with caution. Sprites could be vicious when provoked and this one’s sparkles were fizzing erratically enough he thought she was holding onto her control by a thread.

“Hello, little one,” he said, keeping his voice low and soft.

The sprite flinched and pressed against the wall, nearly crushing her delicate wings.

Trying not to loom, Liam went to his knees. When that wasn’t enough, he got down on his belly and regarded the small creature with his chin nearly on the ground.

She would fit comfortably in his palm, he thought, and as he waited for her to settle enough to speak, he marveled at how she looked like a perfectly miniature doll.

A potentially vicious doll, but still.

When her sparks stopped fizzing and popping, Liam dipped his head in an abbreviated bow. She mimicked him, her eyes wide and startled.

Keeping his volume low, he tried to draw the wee creature out. “I am the Guardian in these woods, little sprite. What brings you to my home?”

When he received no answer, Liam settled into his sprawl, resigned to putting off gathering Ari until he’d coaxed a response from the sprite.

Surprising him, the sprite pealed herself off the wall and edged closer. She looked at him with a wary expression, but her sparkles weren’t flashing like they had been and she appeared to have calmed.

“I come to ask for sanctuary for my tribe.” Her voice was high like that of a child’s, but her words made her seem far older. “Our territory has been destroyed and we seek a new place to settle.”

It was a story he’d heard all too often. Whether it was a rival tribe laying claim to their land or human construction, the smaller supernaturals often found themselves homeless and without a safe place to raise their families.

“Where is the rest of your tribe now?”

The sprite flicked a hand toward the entrance. “Hiding. They were uncertain what type of creature you were and whether you’d find us prey.”

So they’d sent in this little one to scope the place out. Sacrificing one of their own was a sad fact of life for the smaller supernaturals.

Smiling gently, Liam got carefully to his feet. Holding out his hand, he waited as the sprite debated whether to trust him or not.

Trust won out and she climbed into his palm, her sparkles flashing again.

“Call your tribe,” he told her. “Tonight you may stay in the garden by the house. If it doesn’t suit you, we’ll find a new place tomorrow.”

The sprite dipped her head and clung to his thumb as he began to walk. He heard her call out in her high, thin voice when they exited the cave and watched as a small swarm of sprites drifted from the trees and bushes surrounding the entrance.

Keeping his pace steady, Liam made the long walk back to the house. The little sprite stayed in his palm the entire time, her expression grateful.

Liam knew Ari would make room for the sprite tribe in their garden just as surely as she’d found a place for the gargoyle to spend his daylight hours.

And after they got the sprites settled, he still planned on spiriting Ari away to the cave for date night.

His world was always going to be complicated, it was up to him to find a way to make the things that mattered work. His loving, generous mate needed the downtime as much as he did. His friends, both old and new, would do their part.

His job would never end. It was part of who he was as a Guardian, but that didn’t mean he would ever neglect his mate or her needs.

As he left the sprites to explore the garden and went to find Ari to meet their newest tenants, Liam realized he was happier now than he’d ever been when he’d been living alone in his cave. His life might get crazy and his mate would never stop trying to help those she met, but her generosity of spirit was what had called to him when they first met.

Giving up his solitude was a small price to pay for the bounty she brought with her.

And he could always plan another date night for just the two of them when the chaos around them grew too overwhelming.

Feeling lighter, Liam cornered his nymph and brought her out to meet their newest supernatural friends.