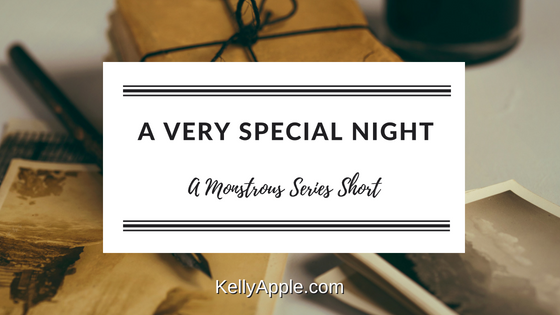 Usually, Amanda wasn’t excited to lock the library doors at the end of the day.

No, that wasn’t quite right. She was normally happy enough to end another shift so she could head home to her mate and all the wonders that came with his handsome body, but she wasn’t normally giddy about turning the key and locking the doors for the night.

Which meant tonight was special

She didn’t want to get her hopes up about how special, but sometimes a medusa just knew when things were going to happen.

Now, she didn’t know things the way Jerinth knew them. She didn’t have his gift for visions of the future, but her kind weren’t considered the gatekeepers of knowledge for nothing.

It only took her a matter of minutes to pull the bag she’d packed this morning from her office. A quick stop in the break room and she had the groceries she’d picked up on her lunch hour.

A glance at the clock over the help desk told her she had about fifteen minutes to get everything set up before Jerinth got here. Provided he wasn’t early, of course.

Her mate’s ability to see the future made surprising him difficult.

Not that it stopped her from trying.

Honestly, she sort of suspected he had at least an inkling of an idea of her plan for the night. Even if he hadn’t had a vision, her asking him to meet her after work was out of the ordinary.

Of course, when your mate was a half-man, half-snake anything they tried to do in public ended up being out of the ordinary.

Not that the library was public. At least not once those doors were locked.

That giddy feeling bubbling up again, Amanda set up her supplies and stopped by the bathroom to make sure she was presentable. A special night deserved some special consideration, after all.

Her hair was just as wild and unmanageable as it normally was, but Jerinth loved her hair. He could spend hours toying with her curls as they lay in comfortable silence on the bed. She often did the same with the place on his hip where the scales from his tale blended into his more human skin.

There was one spot that made him twitch and suck in a breath every time.

It amused her to think of her big, strong mate being ticklish. He’d seemed just as delighted to find the places on her that caused her to wriggle away from his questing fingers.

A short, hard rap on the front door had Amanda straightening.

Right. It was time to woo her mate and give him a surprise he might not see coming.

Jerinth stood in the shadows by the entryway, a heavy cloak drawn up over his head and flowing down to cover the bulk of his beautiful body. She’d asked him to wear the cloak specifically. It reminded her of the first time she’d met him, when she’d cast aside all her rules for the library and debauched him in the stacks.

A shiver went through her. That had been a memorable night.

Hurrying to unlock the door, Amanda ushered her mate in and had him round the corner so they were out of view of the front door before she let him remove the cloak.

As the billowing material was carefully folded and put on the help desk, Amanda marveled that he was just as captivating to her now as he had been during their first meeting. His smooth, hairless head with its faint patterning of scales begged her to touch it.

His chest had gotten broader, the muscles even more defined since he’d started spending time with Liam and the others. There always seemed to be work to do around the big house and Jerinth often offered his services to the Liath Mor as thanks for giving him a place to stay.

Pushing aside thoughts of their friends, Amanda met Jerinth’s amused stare with a sultry one of her own. “Hello, handsome,” she purred.

Jerinth’s amusement faded to be replaced by something hungry. “Hello, love.”

When he went to say more, Amanda laid her finger against his lips and shook her head. She’d taken pains to make this evening reality and she didn’t want to delay her plans with talk.

Lacing her fingers into his, she led Jerinth through the darkened library to the stacks. She wondered if he remembered this particular row of shelves from their first meeting.

They’d learned each other here. They’d taken their first steps into a relationship that made her happier every day.

And now, maybe, they could take their first steps in a new direction.

She knew the moment Jerinth saw the blanket and supplies she’d laid out. She’d recreated their first date as much as possible and his hand tightened around hers as he took it in.

She’d prepared a careful speech. She’d thought about the best way to tell him. She’d considered a hundred different ways to approach this.

Of course, she just blurted everything out instead.

“I’m in my fertile time, mate. Medusa’s don’t come into their heat often and I was hoping you’d want to consider starting a—”

He was on her before she’d finished. His mouth was hard, hungry, ravenous for her. His hands held too tightly, but she didn’t mind.

There was such fierce joy in him, she knew his answer before he spoke.

Heart pounding, Amanda let him draw her down to the blanket.

And then she allowed him to debauch her and her library in every way imaginable. And possibly in some ways that might not have been.

After all, it wasn’t every day a medusa and a naga decided to start a family.

Something as momentous as that deserved a little rule breaking.

That was the last thought Amanda had as she let her mate sweep her away in a storm of pleasure.

Want to see how Jerinth and Amanda first defiled the library? Monstrous Matchmaker: The Complete Series has their story. (Or grab Operation Naga if you prefer to read it as a serial.)