Yeah. Logan and Jenna have an interesting start to their relationship. And time-traveler Logan has A LOT of great moves to put on his now and future lady. (No worries, present Logan learns exactly what Jenna likes eventually. RAWR!)

(And since I don’t remind people of the bonus scenes often enough…) Did you know there’s a series short featuring these two sassy lovebirds? They get frisky at the office just to annoy the boss-man in Tension Relief. 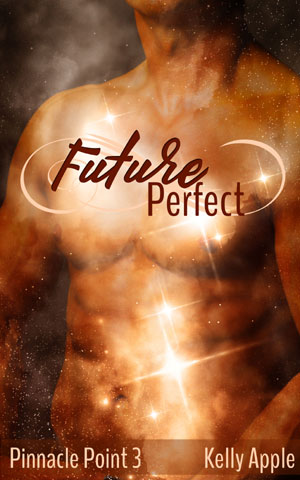 Three years ago, Logan Harker quit his job and moved sight unseen to Pinnacle Point. With his cousins living there already, it seemed like a no-brainer.

Somewhere along the way, the no-brainer turned into a WTF?!? With one cousin now haunting the local hotel and the other a sex-crazed zombie, Logan’s wondering if it’s time to hang up his pocket protector and get out of Dodge. He’s all set to turn in his resignation when a new project crosses his desk. Unable to resist, Logan throws himself whole-heartedly into one last, mind-bendingly complex algorithm.

Faced with the incontrovertible truth of his perfect future self, Logan has to decide if leaving Pinnacle Point without exploring all the possibilities it has to offer is something he’s willing to do. Throwing away this potential future seems downright wrong to his mathematical mind.

And Logan is nothing if not thorough about his calculations.