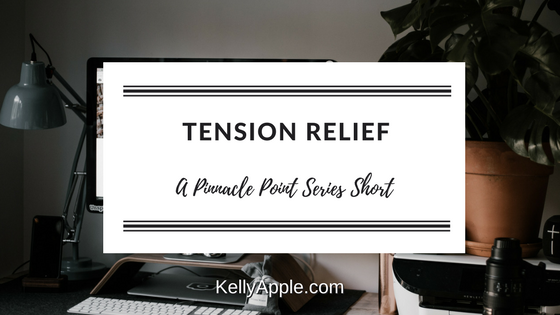 There wasn’t enough scientific data in the known universe to allow Logan to accurately predict his fiancé’s mood as the date of their wedding grew closer. She ran the gamut from giddy excitement to teary wails of distress that everything wouldn’t turn out just right over the course of every twenty-four hour period.

At the moment, Jenna was focused on her work, so she was neither giddy nor teary. At least not about the wedding.

Scowling, she clicked something on her computer and glared until the printer began to spit something out.

Despite the overwhelming urge to smile at his beautiful fiancé’s expression, Logan kept his face carefully blank. Since the strange, incredible night that had been the start of their romantic relationship, Logan had learned a lot about Jenna and her moods.

Not enough to predict where they’d turn in regards to the wedding, but enough to know she wouldn’t quickly forgive him if he laughed at her when she was upset about something.

See? You could teach a socially awkward scientist a few tricks.

Jenna muttered something uncomplimentary about the matriarchal lineage of her laptop and ground her teeth together. Not wanting her to damage the equipment, Logan cleared her throat before she could pick it up and violently heave it across the room.

Jenna’s glare was potent, but it wasn’t directed at him. Not really.

Even when she turned the full force of it in his direction, Logan knew she was more irritated with the new database they’d recently upgraded to than him.

After all, he’d done nothing to warrant a look that could fry the circuits on a motherboard.

At least he didn’t think so.

“Whose idea was it for this upgrade again?”

Logan thanked whoever was out there watching over him that it hadn’t been his suggestion. “Kane,” he said, completely willing to throw his boss under the bus. “He said the old database didn’t have enough room for expansion and he had too many plans for the future to be hampered by a shoddy record-keeping system.”

Jenna growled—an actual full-throated growl that would probably get a nod of approval from the werewolf in charge himself—and glared even harder. “I really don’t like it.”

“No one likes it.” Logan paused. “Except Kane, I guess. He seems perfectly happy with what it can do.”

A roar echoed from down the hall. “I can hear you, Jenna-Lynn,” their boss bellowed.

Jenna snarled. “I know you can, you idiot.”

Logan coughed to cover up his laugh. Kane and Jenna had been at each other’s throats since Jenna had marched into his office and bluntly told him she was dating Logan now and he could stick his non-fraternization policy up his hairy ass.

Personally, Logan thought Kane was more bothered by the hairy ass comment than the fact he and Jenna were dating. Werewolves were weirdly sensitive about their hairiness being pointed out to them.

Considering Kane sprouted excess hair once a month whether he wanted to or not, Logan thought he might understand.

But whatever. He didn’t like to think too much on Kane’s excess hairiness.

Stepping into her glare, Logan raised a suggestive eyebrow at his beautiful fiancé and cocked his head in the direction of his office. “Do you need to take a break, babe?”

Jenna opened her mouth and then closed it. She got a look on her face that made Logan’s heart rate pick up.

“You know what, lover? I think I do need a break. A long break. A hard break. On your desk. Maybe more than once.”

Kane groaned from down the hall. “If I apologize again for making you learn this new system will you please stop having sex in Logan’s office?”

Jenna’s smile sent a shiver of desire down Logan’s spine. “No,” she yelled to their boss. “An apology won’t cut it.”

“Jesus, Jenna,” Kane snarled. “I didn’t authorize the upgrade to specifically piss you off, you know.”

Logan could imagine Kane’s expression. The werewolf would have his face screwed up in disgust as he glowered at the door.

Another smile from Jenna, this one as sharp as a blade and just as deadly. “Well, lucky you, I’m pissed off all the same.”

Logan turned to look at the wall. He found it amusing when Jenna stood up to their boss. Kane adored her quick mind and would never fire her for sassing him.

In fact, Logan thought the only thing that would ever cause her to lose Kane’s approval would be if she deliberately sabotaged any of the experiments going on in the lab.

Considering one of those experiments had been the reason they’d ended up together, Logan knew beyond a shadow of a doubt that was one thing his Jenna would never do.

Kane growled from down the hall, but Logan barely heard him.

The woman was lethal and if she wanted to get naughty on his desk, who was he to argue?

Sappy smile on his face, Logan followed Jenna out the door and down to his office. He was pretty sure Kane grumped and growled from his own office the entire time, but Logan didn’t give two shits.

His lady needed him to relieve some tension so she could be refreshed when she went back to tackling the database.

As a scientist, he was obligated to help his fellow man achieve the greatest heights they could achieve.

And achieving great heights with his Jenna was his specialty.

Want to see how Logan and Jenna got together? Grab Future Perfect to read their story or pick up Pinnacle Point: The Harker Collection to meet all of the Harker clan.