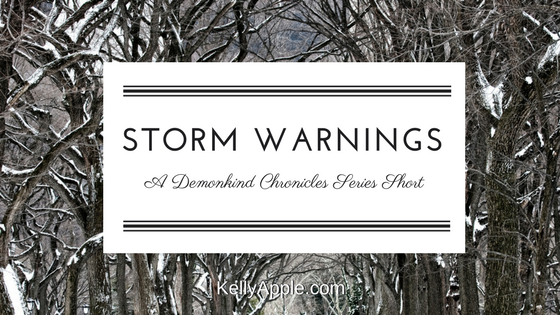 Exhaustion weighed Evie down and she blinked at the fire crackling in the fireplace, confused.

Hadn’t Bas been carrying her upstairs earlier? This was the parlor, though. Which was clearly downstairs.

And she was on the couch, her favorite blanket tucked around her.

Sitting up, Evie tried not to let panic get the best of her.

No matter what was going on, she was safe. Bas wouldn’t let anything happen to her in his house.

Unless…unless something had happened to him.

Instinct nearly had her scrambling off the couch to run shrieking through the house to find him.

But she was more than instinct.

Think. She’d woken with the fire fully stoked and her blanket covering her. The house was quiet, no sounds of a struggle or fighting coming from any direction.

There was only the incessant howl of the wind as the winter storm battered the countryside.

Okay. Use your brain, idiot.

A curl of steam caught her eye. A mug. There was a mug sitting on the side table, still hot enough to send up steam.

Wherever Bas was, he hadn’t been gone long.

A slow breath in and then out.

She was fine. Bas was fine. She couldn’t let her fear shatter her.

All she had to do was pull the blanket off her legs and swing her feet to the floor. She could stand up and go find her beloved demon.

She could do this.

Her body refused to cooperate.

Instead of bounding up, she sat there like the useless waste of space she was. She was the idiot who couldn’t—

No. That was her father talking.

Blocking out the cruel words she’d heard more than once, Evie pulled up the memory of Bas’s voice. The first day of the storm, they’d been up in the little room she’d claimed as her own. Her demon’s voice had rumbled in her ear when she’d been curled on his lap.

She liked the way his massive chest vibrated slightly when he spoke. It soothed her. When she tucked her head into his shoulder, her forehead against the side of his neck, it let her feel his words throughout her body.

That was what she needed to focus on.

Bas. His voice. His wicked smile. The words he growled in her ear when they were tangled up in bed.

The tightness in her chest eased and Evie felt like she could breathe again.

He wouldn’t leave her. Not him.

He was here. Somewhere. Likely making her food since he’d made it his mission to soften some of the sharp edges starvation and fear had given her under her father’s—

No. Her father wasn’t allowed here.

Another slow deep breath, in and out.

Her demon was beautiful. Strong and proud, his horns a majestic sweep off his brow. There was a dark mark at the junction of his throat, right over the scars she’d given him when they mated, and it took a moment of hard staring for Evie to figure out what it was.

She remembered latching onto that spot during the height of their love play earlier. Part of her wishing she could bite him again and part of her not wanting to cause him any pain.

Instead she’d left a love bite behind. Not quite the bite she’d wanted to give him, but a stark reminder of the hours they’d spent together.

She knew she was blushing. She could feel the heat in her cheeks, making them burn brighter than the fire. Sweat blossomed at the small of her back and she ducked her head so Bas wouldn’t know how much that small mark affected her.

Her demon could read her so well.

Evie squirmed. She did. It scared her and aroused her and made her very glad they were the only two locked in the house right now.

“Maybe,” he went on, his voice the low rumble she loved, “you need a matching mark.”

A shiver worked its way down her spine.

Bas gave a low, wicked laugh. “That sounds like a fun way to spend the afternoon.”

Daring to be bold, Evie raised her head and focused on his beautiful mouth. Words failed her, but when she reached for Bas, he understood.

And Bas did, indeed, spend the rest of the afternoon leaving his mark on her.