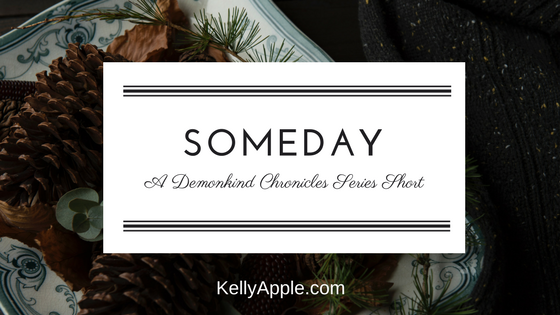 Evie had never known she was a tactile creature until she came to live on the demon plane. She hadn’t known how much she enjoyed the feel of plush velvet (or whatever passed for velvet in Bas’s world) beneath her fingertips or how the mere touch of her demon’s hand against her skin could settle her disquiet with gentle pressure.

She loved Bas’s touch the most. He had calluses on his palms and fingertips from the work he did around their house. Those rough edges anchored her when they rasped over her skin.

They eased the hunger to be touched she’d felt since her mother died.

They made everything real again.

Today, she toyed with a piece of decorative fringe on one of the pillows in the sitting room. The cool strands slipped through her fingers hypnotically and Evie smiled to herself at both the feel and the sound it made.

Bas was going over some plans with Arix in the next room and the rumbling thrum of his voice made her blush. Last night, he’d growled filthy words in her ear as he coaxed her body to the heights of pleasure.

His voice, she thought, would forever be wrapped in memories of skin and silken touches. Hearing it took her back to what they’d done and the phantom echo of their play washed over her skin.

Conjuring up a picture of her demon, Evie wondered if he had his hands braced on the table. That position was one she loved since it threw his impressively large biceps into relief. His hands would be splayed against the wood, the size of them simply breathtaking.

And his horns—those beautiful, majestic horns—would curl back from his proud forehead, the cracked tip a stark reminder of the life he’d lived before she came into it.

It was strange to think of him having a life before her. Hers had started when he’d pierced her throat with his teeth.

No. It had started when she’d caught sight of him trapped in the magic circle her father—

Panic clawed at her insides at the mere thought of the man who had used her as a punching bag for the pack for so many years. Closing her eyes, Evie concentrated on the things she could hear and touch before the memories swamped her.

The twisted strands of the fringe on the pillow. Bas’s voice in the other room. Arix’s snort of amusement over something her demon had said. The firmness of the couch against her back.

They were each important in their own way.

Still, she needed more to keep her anchored.

Her free hand swept out and felt the nap of the material of the couch beneath her fingertips. It rasped against her skin the way Bas’s palm did when he stroked over her hip.

He’d rubbed his thumb against her lower lip last night once their breathing had returned to normal. She’d been bold in that moment—her body boneless and pliant from all the pleasure he’d given her, the screaming voice of her father silenced by Bas’s scent and feel—and she’d caught the tip of his thumb between her teeth.

A nip. Nothing more.

But it had caused Bas to growl and fire to rekindle in his eyes.

A warm hand cupped her cheek and Evie opened her eyes to find the very demon she’d been thinking about staring at her.

A slow blink and Evie managed to nod. By the worried growl in his voice, that wasn’t the first time he’d asked.

Letting out a slow breath, Evie cuddled into the hand curled around her cheek. Touching inanimate things was good enough to pull her back from the edge, but Bas’s touch scattered her fear like the pillow and couch couldn’t.

As amazing as it seemed, he was hers, too.

Her demon. Her lover.

With a soft sigh, Evie raised her arms and let them find their favorite place around his neck. As always, Bas read her unspoken cues and gathered her close, his voice rumbling in her ear as she settled against him.

The soft pad of footsteps and Evie knew Arix had left. It was just them.

Her and her demon.

He was touch and sound. He was everything.

There was nothing to say. Her father’s hold on her loosened a little more each day. Soon, the thought of him wouldn’t send her into spiraling panic.

Pressing her forehead to Bas’s neck and tightening her arms around him, Evie tried to tell herself she wasn’t lying. Someday, her father wouldn’t be able to hurt her when he wasn’t here.

As Bas’s hand swept down her back—comforting and strong, pushing memories of pain and fear away with every stroke—Evie let herself feel.

Bas’s skin. His warmth. The rough rasp of his calluses when they caught on the nap of her shirt.

She was safe. She was cared for.

Bas had taught her there was more to life than endless fear and hunger.

Day by day, she was learning.

Content for the moment, Evie sank into her demon and let him wash away her memories with his kindness.