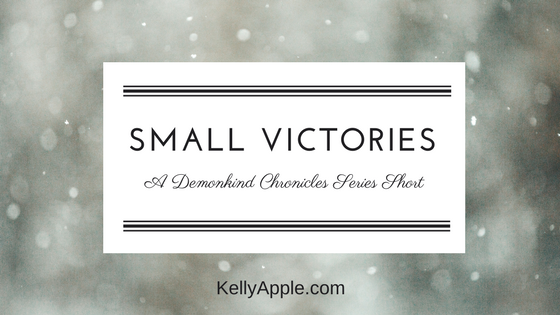 Bas knew the storm heading toward them would be strong, but he hadn’t expected it to hit as quickly as it did. Arix had gone to town for a few more supplies and Evie was up in her cozy room under the eaves when the wind began.

Within an hour, he knew Arix wouldn’t be making it back and he and Evie would be on their own with the supplies they had on hand.

Bas wasn’t worried. Their root cellar was well stocked and the house was sturdy. Holing up with his little kitten to wait out the storm wasn’t a hardship.

But Evie wasn’t used to this kind of weather and he needed to make sure she was doing okay.

So Bas made the trek up the narrow stairs to the little room she’d claimed as her own to find her huddled under a blanket in front of the window, her expression distressed.

Settling on the small couch beside her, Bas tugged his sweet werewolf onto his lap and tucked her head into the hollow of his shoulder she always cuddled into. “It’ll be fine, love,” he told her, keeping his voice low.

He hated the fear he heard in her voice. It was a knife that ran straight through his heart. Not for the first time he cursed her father for the scars he’d left on his Evie.

“It’ll blow over before you know it,” he said instead of growling out a few choice curses on the man who’d terrorized this lovely woman.

“Will Arix be okay?”

Running a hand down her back, Bas smiled. Even after a few weeks of having Arix in the house, Evie was still wary of him, but her heart was so tender she asked if he’d be fine.

“I’m sure he is. He’ll have found a place in town to stay until it’s safe to travel again.”

Wriggling until she could sit up, Evie looked at him. “It’s just us here.”

There was a touch of wonder and excitement in those few words and they made Bas’s smile grow.

A flush climbed up her throat and stained her cheeks red. Bas waited. When her teeth dug into her lower lip and she dropped her chin so she was staring at the top of his shirt instead of his face, Bas refused to feel disappointed.

His little wolf had come a long way from the broken girl she’d been. She might be hesitant and shy about some things, but she was far stronger than she had been in both mind and body.

For now, he’d take the small victories as they came. Evie wanted to spend time with him. Her fear over the storm outside had morphed into a sweet, quiet excitement over them being alone in the house.

She might not be able to ask for what she wanted yet, but she was getting there.

Every day the chains her father had wrapped her in loosened a little more. Someday, she’d trust him—and herself—enough to be bold and daring.

“Now what,” he asked, his voice a gravely rasp, “could two people alone in a storm possibly do to keep themselves entertained?”

It gladdened his heart when her mouth quirked up in a shy smile. She wasn’t looking out the big window at the falling snow anymore. Worry about what was to come didn’t dull her eyes. She was focused on him, the lovely pale blue of her eyes vanishing as her pupils dilated with arousal.

She looked sweet and cuddly and turned on all at the same time and Bas had the sudden, undeniable urge to muss his little wolf up. He wanted her writhing and gasping his name.

And after, he’d brush the tangles from her hair and wrap her in the softest blanket he could find so he didn’t abrade her delicate skin.

They’d sit by the big window in the parlor and watch the snow fall. They’d eat and sleep and wake to do it all again.

It was, in a word, perfect.

Not wanting to waste a second of their precious alone time, Bas eased the blanket from Evie’s shoulder even as he settled her more firmly against him.

Small victories, he reminded himself. Every step forward was one that helped shape his sweet wolf into the woman he knew she could be.

Bending his head, Bas kissed her and let the world around them fall away.