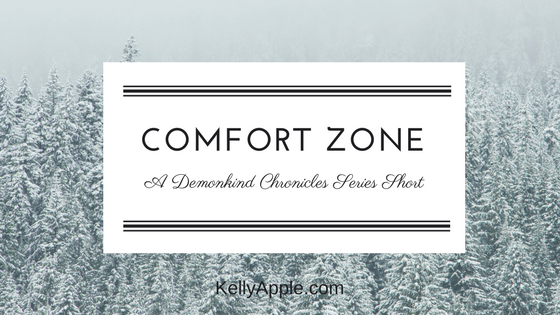 To Evie’s immense regret, things were getting back to normal in the house. The winter storm that had kept them housebound had eased and Arix had arrived earlier in the day, hauling in fresh supplies to restock the root cellar.

As the men worked on getting everything put away, Evie had felt like a fifth wheel—useless and in the way. She’d finally retreated to her upstairs room when Arix nearly knocked her off her feet as she tried to slip behind him to help put some of the supplies on shelves.

The good news was that Bas’s growl of annoyance at the near collision hadn’t sent her into a bout of panic. The bad news was that Evie had seen quite clearly that the quiet time she and Bas had spent together over the last week had come to an end.

So she’d dared to pat her demon on the arm and give him a shaky smile before leaving them to their task and heading upstairs.

Alone, she felt restless. There was too much energy under her skin. Her head kept circling around the things she and Bas had done to fill the long, quiet hours while alone in the house.

Funny, she wouldn’t have figured being trapped would be so enjoyable.

The itch under her skin got stronger. It was a drive to move and do something she’d never felt before. She wasn’t sure she liked it.

Bypassing the small couch, Evie stepped to the window and looked out at the frozen countryside beyond. It looked like something out of a fairytale—beautiful and deadly all at the same time.

The trees glittered with the ice dripping from the branches. If she were to step beneath them, would she look up to see an enchanted chandelier of light?

The whimsical thought made her smile.

Just as quickly, her smile faded.

She wouldn’t get to see what it was like beneath the trees. Her body might long to run and push itself to see what was out there, but her head wasn’t ready.

Bas would take her, but how long could she use him as a crutch before he grew tired of it.

Forever, came the soft whisper of her heart. He is yours.

True. But was that fair to him?

Bas was big and strong and he deserved someone who could at least show some bravery. Right now, she wasn’t that person. She was small and afraid. At times, her nightmares held more sway over her than the reality of the demon beside her.

She would change that. She’d made that decision and she was determined.

Day by day, piece by piece, she was rebuilding herself. She might never be the bright, brave girl her mother had praised her as, but she wasn’t the broken wolf her father had despised either.

She was something else.

Something between what she could have been and what she would be.

Evie might not be brave or strong or any number of things a demoness was, but Bas had chosen her all the same. He’d put his mark on her and he treasured her.

That was reason enough to keep pushing forward.

Pressing her fingers to the glass, Evie studied the frozen landscape laid out like a painting beneath her. The only thing holding her back from going out there was herself. She could find some warm clothes and bundle herself up and just do it.

Swallowing, she turned that idea over in her head.

Yes. She could do that.

She would do that.

Bas and Arix were still in the kitchen, their voices echoing through the house and making Evie’s heart swell with something bigger than her. She listened to them as she put on extra layers. They spoke of mundane things—how much firewood they had on hand, whether they should check the coop that corralled their chickens—and their easy camaraderie gave her pleasure.

Once dressed, she followed the sound of their voices until she hovered at the doorway, suddenly uncertain. She could go out. She would. But would Bas be hurt if she said she’d like to do it alone?

The demon in question watched her from where he stood by the monstrosity of a stove, one eyebrow quirked up. He knew. She could see it in his eyes.

“I’m going outside for a bit,” she blurted out before she lost her nerve.

Bas nodded even as Arix straightened and gave her a funny look. She probably looked ridiculous in all her layers, but that was the least of her worries.

“I won’t go far.” She was stalling. She knew that. Before Bas could offer to come with her and she’d have to turn him down, Evie darted for the door.

“Have fun,” was all he said and that tight place in Evie’s chest loosened.

Reckless momentum kept her moving forward until she was outside. As the door slammed shut behind her, Evie came to a halt and sucked in a shocked breath. Cold. So unbelievably cold. It was like someone had ripped the air from her lungs and it took a second for her to manage to breath properly again.

Once that was under control, she looked at the world and felt the deadly beauty of it seep into her.

Her garden was buried, the trees looked like sad giants struggling under a great burden.

But it was lovely. More so than she’d imagined when she looked down on it from above.

Feeling brave, Evie stepped away from the house and took a few hesitant steps into the untouched snow beyond the stoop. Wetness seeped into her shoes and she knew that would send her inside soon enough, but for now she enjoyed it.

The world was…beautiful. Strange and deadly and beautiful.

Just like her demon. The only difference between them was that Bas wasn’t cold.

Smiling, Evie turned in a circle and took it all in.

She’d been brave. She’d stepped outside her comfort zone all on her own and found something wondrous.

She’d climbed a hurdle that had felt impossible just a few months before and she was stronger for it.

When the door opened behind her and a hard body fitted itself to her back, Evie’s smile grew. She was cold and a little damp around the edges and she felt good.

Her protective demon had given her the few minutes she needed to prove to herself she could do this and that was enough.