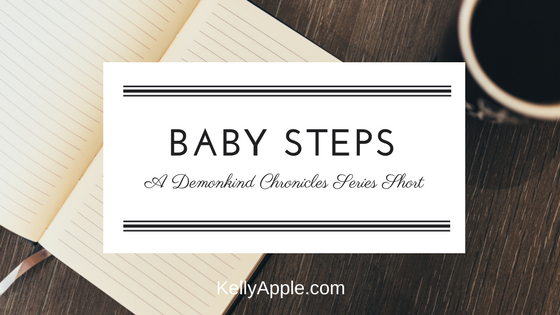 The demon world wasn’t all that different from the world Evie came from. Not physically, at least.

The difference that meant the most to the damaged werewolf was something she had a hard time putting into words. Mostly because she hadn’t realized what it was until several weeks after she and Bas had settled into his big house in the country.

As safe as she felt, old habits were hard to break.

She still sometimes found herself flinching away when a door closed too hard or Bas and Arix started growling insults at one another. The first time it had happened, she’d glanced up to see Bas’s face go blank.

Evie didn’t pretend to be the smartest person in the house, but even she could see that her involuntary reaction had hurt the demon who had saved her. And she didn’t know how to fix it except by fixing herself.

So she began with baby steps. The next time Bas and Arix had started throwing insults, she’d held her ground. She hadn’t been able to make eye contact with Bas, but she hadn’t fled the room. Somehow, Bas had known how much courage that had taken because he’d swept her into his arms and praised her with lips and tongue.

Evie didn’t have much experience with kissing, but she thought Bas’s kisses had to be the best on all the worlds.

He made her forget. He erased who she was and let her fly free in the moment.

For a damaged wolf like her, there was no greater gift. In his arms, she was just Evie. Not Evie the Null or Evie, Conn’s daughter. She was just her. And she felt whole.

For a handful of glorious moments, she felt like someone who deserved to have a demon like Bas look at her with adoration in his eyes.

One baby step turned into two when she screwed up her courage again and asked if she could plant some vegetables in the garden. Bas hadn’t hesitated to say yes. Then he’d sent Arix out to the nearest village to pick her up some tools that fit her smaller hands.

Now she had a small kitchen garden that had sprouted herbs and a few rows of a funky looking purple carrot and she felt good that she was contributing something to their household. Arix would sit out with her sometimes when Bas was busy and she was learning to tolerate his presence.

It wasn’t that Arix was a bad guy or anything, but he was an unknown. And the unknown scared Evie.

Admittedly, she’d only known Bas a few weeks longer than Arix, but Bas was hers. Arix was just a guy she was expected to rely on if things ever turned sour.

Shivering, Evie hunched down and ordered the memories trying to worm their way out away. They were sticky, insidious things and they had a tendency to tear through her carefully constructed walls to reveal how weak and pathetic she really was.

Bas had taught her differently and she was determined to listen to the man who had saved her and not the screaming voice of her father and his taunts.

Baby steps, she whispered to herself.

Every day she kept her head up was a win. Every day she pushed down his voice and chose to listen to Bas’s was another victory.

Today, she wasn’t in her beloved garden. She’d carefully scrubbed the dirt from under her fingernails and worked on tidying up the guest rooms in the huge house. She couldn’t say why she was doing it since they hadn’t had a single guest since they’d moved in, but today seemed to call for some fluffing and straightening.

Although, the rough weather outside might be part of the reason. The winds here tangled her hair something fierce and it had taken her a while yesterday to work all the knots out after she bathed.

Two rooms done, Evie stepped into the hall and looked at the half dozen doors marching in orderly fashion away from her. She had peeked into each of the rooms when they’d first arrived and been completely awed that she—the lowest of the low in her father’s pack—had free rein of this beautiful place.

She remembered the small, steep stairs she’d stumbled over and decided to head up and explore the room she’d found at the top. Bas and Arix were strategizing in the front room and she had both time and privacy to be as nosy as she wanted to be.

For all Evie doubted they were often used, the stairs were free of dust and cobwebs. The room at the top was oddly shaped, tucked under the eaves with one large window looking out over the grounds at the front of the house.

She liked that she could see so much of the countryside from up here. She liked that no one would be able to sneak up on them from this direction.

Sighing, she left the window and explored the rest of the room. The shape suggested it had never been used as a bedroom, but Evie was at a loss as to why it had been built.

It was a strange, odd little room and she pictured a small desk against the wall. She’d put a cozy couch in front of the window with plenty of blankets to snuggle under for warmth.

It could be a comfortable space for someone like her who didn’t need much.

The door creaked open behind her and, to her credit, Evie didn’t flinch. Bas made the small space feel even smaller and Evie found herself smiling when her big demon looked around.

Baby steps, she reminded herself.

“Good. Tell me what type of furniture you’d like and anything I can’t make I’ll send Arix to town for.”

He made it so easy to adore him.

Feeling brave, Evie went up on her toes and tugged him down until she could reach his mouth. Her kisses were still shy and hesitant, but she was trying.

“Thank you,” she said, that warm sense of safety being eclipsed by the lust that never quite went away.

In the odd little room at the top of the stairs, Evie told him what she envisioned. Bas listened closely and offered a few suggestions.

Afterward, they christened the small room and filled it with memories of them.