This week’s series short features Ivan and Callie. My grumbly bear and the cat who adores him. 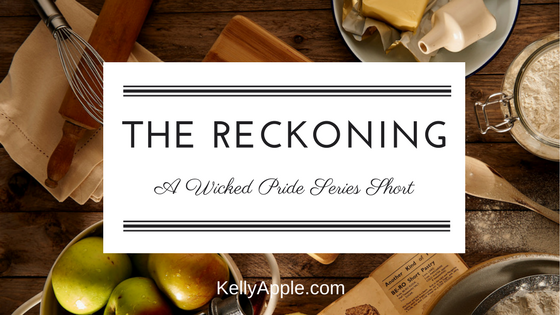 Baking was Callie’s way of dealing with stress.

Actually, it was her way of dealing with everything.

Rough day at the office? Bake some muffins.

Feeling inexplicably turned on when she thought of her honey? Scones could help.

Apocalypse coming and the world as she knew it was about to be destroyed? Her cinnamon twists were the answer.

Her latest baking binge had been brought on by the news that Ivan’s mother, the terrifying leader of the Fallen Oak Grizzly clan, would be stopping by in the next day or so to take a look at the building Ivan had found for the restaurant the clan hoped to open in town.

Angelina Hearne was coming to her house.

Where she and Ivan were living.

Because, of course, Angelina would know Ivan spent more time here than at the clan house a street over. That’s what terrifying almost-seven-feet tall grizzly sows did.

She was probably busy toughening up her fists on some redwood trees right now. So, you know, she could challenge Callie to a bare knuckle brawl to make sure her favorite son was in good hands.

Part of Callie knew she was overreacting.

Angelina Hearne had been terrifying, yes, when they’d first met, but she hadn’t engaged in a sneak attack or tried to poison Callie or anything.

She was just scary. And big.

Ivan had his mother’s height, but Callie didn’t feel comforted around the big sow like she was around Ivan. Her mate made her feel safe and protected. His mother made her want to run and hide in a closet.

Which, unfortunately, reminded Callie of the other reason Angelina might be a little peeved with her.

She had, after all, seduced Ivan in an empty office the first time he’d taken her to his clan house. That seduction had, naturally, come after Angelina had specifically told them not to screw around until after the cubs went to bed.

Honestly, Callie had meant to follow the rules. Really. But Ivan had been so big and burly and Callie hadn’t been able to resist when he’d gotten a little growly with her and the next thing she knew they were rattling the office door hard enough Angelina had to come and shout at them to keep it down.

She’d successfully avoided it for almost a month.

But now…well, now her time was up.

She baked the salmon biscuits Ivan loved. She baked a double batch of cinnamon twists for the coffee shop. She baked a batch of her favorite mocha coffee cupcakes with espresso frosting for herself.

If she survived the meeting with Angelina, she’d have Ivan taste those and see if the bears liked them. And if they did, she’d start making up a batch every morning to stock the display at the coffee shop.

As it turned out, she had a knack for making treats the bears just loved.

In the back of her head, she had the idea that she could turn this weird knack into a business. After all, if the bears were here to stay in town, somebody needed to look after them.

Why shouldn’t that someone be her?

She’d already hooked one bear with her irresistible treats, might as well go for broke and feed the entire clan.

But only if she managed to make it through this meeting with her mate’s mom.

The door swung open and Ivan strode in. “Hey, Cal. I’m getting…” His voice trailed off as he took in the mess she’d made of the kitchen.

Yeah, oops. She’d not only gone overboard on the baking, she’d used just about every bowl in the house and hadn’t followed her cardinal rule of cleaning as she went. So it was a hot mess in here.

“Oh, yeah. Fine. No problems. I’m just trying out a few recipes I think you’ll like.”

“Try this one.” Callie shoved one of the mocha cupcakes into Ivan’s mouth before he could tell her everything would be fine and she needed to stop worrying about his mom’s visit.

Everything wouldn’t be fine.

Angelina would know just how she’d been debauching her favorite son and she’d rain holy hell down on Callie’s small house. And once Callie picked up the pieces from that, her parents would be home from the first leg of their RV trip around the country.

A chocolate espresso flavored mouth landed on hers right as she was getting to the part of her freak out where she wanted to change shapes and go find a small cupboard to hide in.

Her big bear was right: Everything would be fine.

Sinking into the decadence that was Ivan’s mouth, Callie let go of her fears about Angelina Hearne. She forgot to be worried about her parents’ arrival.

She just felt. And sighed. And wondered if Ivan wanted to take this upstairs.

As it turned out, that’s exactly what they did.

That’s Callie and Ivan for you. Read how they ended up shacking up in Laid Bear.

I know we’ve gone through all the couples in the series, but there’s ONE more Wicked Pride short I have in store. How do a wildly mixed group of shapeshifters put aside their differences to celebrate the holidays? Stop by next week and find out!