A little holiday planning fun with those unruly shapeshifters… 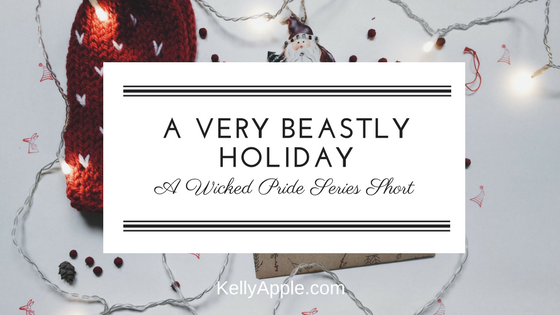 Wrangling a pride of cats (notorious for turning up their nose at gently couched suggestions and doing what they wanted), a pack of wolves (loud, rowdy, and with even more nudity than the cats), and a clan of bears (big surly bastards, even the women) into one place for a holiday gathering was enough to drive any man (or woman) gray.

Kane and Bran faced off across the wide counter and stared at one another as they both waited for the other to give in.

At the huge industrial stove, Callie McLaughlin hummed as she stirred something that smelled sinfully sweet. Her enormous mate (Kane honestly wondered how those two fit together) kept grabbing at her and she kept swatting his huge mitts away with a laugh.

It takes all kinds in the world, Kane reminded himself. Cats and wolves and bears.

They’d gathered in the massive kitchen of the space that would soon be the first (and possibly only) bear-run restaurant in Oak Haven. Kane had suggested meeting at the pride house, but Ivan Hearne (a surlier man Kane had never met) had grumbled that he couldn’t leave his Callie alone at the restaurant and they needed to meet there.

So here they were.

Cats and wolves and bears.

“You’re place isn’t big enough,” Bran pointed out. “Not if my entire pack comes.” The tip of his tongue rubbed against a sharp canine and he made a face. “Plus, I’ve seen what you’ve done on that couch of yours and I’m not okay with being forced to sit on it.”

Kane should have been offended, but the truth was he and his mate had defiled that couch in so many ways it was on its way to becoming a legend. Memories of last night drifted through his head and he bared his teeth in a smile.

The wolf alpha shook himself in a move reminiscent of a dog. “No. We’re not using the pride house.”

“Yeah, well, my pride isn’t setting a paw into the place where your naked-ass wolves drag their asses all over the floor.” Slapping a wrinkled sheet of paper down on the counter, Kane pointed at it. “Do you know how many calls I’ve had to take from the police chief about your pack’s public nudity?”

Callie giggled at the stove again and they both turned to glare at her. This meeting was all her fault. If she hadn’t put a bug in Ivan’s ear about getting the different shapeshifters together for a holiday gathering, they wouldn’t be here now.

They wouldn’t be fighting over ass-dragging and how many times Kane had banged his mate on the poor couch in his living room.

“We’ll have it here,” Ivan rumbled as he used his long arms to reach around his mate and snag a muffin off the counter.

Both Kane and Bran frowned. “What?” they said in unison.

“The holiday meal. We’ll have it at the restaurant.”

That was…not a terrible idea. Not at all. The space was huge and mostly furnished. They had the kitchen space to pull together a truly impressive meal. Plus, the furniture was bear-sized.

Considering how big most of the bears were, this was important.

“That might be doable,” Kane said as the big bear munched on the muffin he’d stolen.

Bran grunted in agreement. “How many people can this place hold?”

Bears. They weren’t big talkers, but they did have good ideas sometimes.

“Okay. So, we’re in agreement on the venue?” Kane waited for Bran’s reluctant nod. Yeah, the wolf liked to argue just for the sake of arguing. “Great. So the menu—”

“The bear clan will take care of the food. You guys just figure out what time you want it to start and make sure everybody behaves.”

That was probably the most words Kane had ever heard the big bear string together at one time. “Okay, but—”

“The wolves can bring the beer. The cats can bring before dinner snacks.”

Kane rocked back on his heels and stared at Ivan Hearne. Okay, that was…another good plan.

For all he looked like a big, angry thug, the bear had an actual brain in that meaty head of his. Who knew?

Inwardly, Kane winced. If his mate had heard that thought, she’d be smacking him upside the head right now. Carrie’s campaign to make everyone look at bears in a gentler light was very important to her.

And changing the way the world looked at the bears started at home.

“’S no problem. Callie came up with the idea.”

The pretty half breed took her eyes off the concoction she was stirring long enough to grin at her mate. Then she went back to creating whatever tasty treat she was working on.

It looked like this holiday gathering was a go.

Now they’d just have to see if cats and wolves and bears could get together for an extended amount of time without any brawls.

Time to go put the fear into his cats.

While the Wicked Pride shorts have finished, there’s more in store for other characters and series. Stop by next week to find out who the next installment will feature.