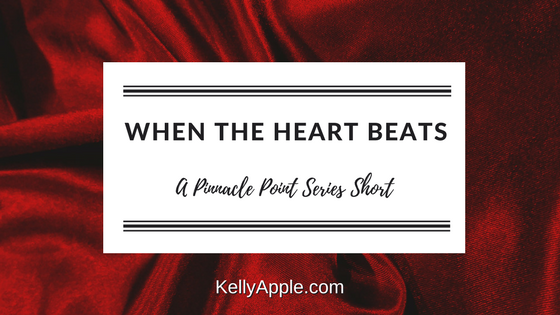 When the Heart Beats
Maisie and Zane
Pinnacle Point

Contrary to popular opinion, zombies did have heartbeats. They were slow and infrequent, but their hearts did beat.

Draped over her boyfriend’s chest, Maisie waited for the next muted pump of his heart.

There. Like the most beautiful sonata, it beat once and then fell still. It could be upwards of an hour before the next one came. Zane would likely be awake by then and she wouldn’t have the chance to hear it.

Which was fine. Her zombie’s sleeping patterns were just one thing she’d had to get accustomed to when they started dating.

He only ate every few days—and procuring the food involved a trip to the morgue—and he rarely slept, but none of those had ended up being deal-breakers.

Sure, Maisie would like to wake up beside him in the morning, but it was what it was.

Zane was a zombie. He ate odd foods. He slept infrequently. His body temperature was a bit lower than hers.

Her man—her zombie—made other men pale in comparison when he was focused on her pleasure.

Maisie doubted she’d ever be able to be content with a mere human now that she’d had a taste of the supernatural. Of course, that implied she and Zane weren’t going to last and that wasn’t something she liked to consider.

Zane Harker was in her bed and her heart and she didn’t have any intention of letting him out of either place.

One of said zombie’s big hands lazily stroked down her back and Maisie knew her introspective time had come to an end. He was awake. Maybe she could keep him in her bed for another hour of quiet time, but her chance to hear the next beat of his heart had likely passed.

Ahh, well. What could a woman do? If she had to sacrifice herself on the altar of their lust to keep him beneath her for one last listen, she would.

Propping her chin on her hand, she looked at her zombie love and gave her smile free rein.

His eyes were still closed, the sooty lashes she envied dark against his cheeks. A smile played at the edge of his mouth—that luscious, decadent, determined mouth—and Maisie watched as it deepened.

He lay against her pillows like some sort of pagan god and Maisie loved him all the more for letting her get a glimpse of him with his guard down.

Zane wasn’t like other men in some ways, but he was very much like every one of the species in others.

She was the only one he truly relaxed with. Even with his cousins he maintained that sharp edge that told her he was always watching. Always prepared for something no one else could see.

Settling back into her place against his chest—the place where she could dear his elusive heart beat the best—Maisie laughed. “It’s not that early, lover.”

“It’s four in the morning.”

The muscles under her gently questing fingers tensed and Maisie raised her head. He was looking at her now, his eyes dark and serious.

No. Wait. He wasn’t gesturing toward his dick, a wicked smile on his face. He looked solemn, like what he was asking was important.

Maisie pushed aside the hormone driven side of her brain for a second to properly parse through his words.

“I need more of what?” she asked after a long moment of thinking.

Need it? Probably not. Not like she needed food or water or air. Wanted it? Well, yeah. She wouldn’t mind lazing away more than a stolen hour or two draped over Zane’s big body whenever he shut down to recharge.

Heh. That made him sound like a robot. Her zombie was anything but a robot.

Besides which, if he was, Zane’s scientist cousin would be here all the time to poke and prod at him.

Zane’s expression tightened when she didn’t immediately respond. “Shit. You do. Okay. We’ll figure out a schedule. Tell me how often you think you need this and I’ll make it happen.”

Her man was so ridiculously beautiful when he started putting together a plan.

“I love this.” Maisie waved her hand between the two of them. “Just like this. No schedules or pre-planning needed. But I love it because I love spending time with you. I love listening to your heart beat. I love being able to just be with you.”

Zane’s face went blank like he was thinking hard about something. “My heart doesn’t beat,” he said after a moment.

She knew he’d say that. And she had a solution to show him he was wrong.

“I can disprove that easily enough. If you don’t mind spending the next hour or so here with me.”

He didn’t hesitate. “Of course. Anything you need me for, Maisie. I’m here.”

Gawd, she loved this man.

She’d once wondered if it was a shame her beautiful man had been turned into a zombie or a blessing. After long hours spent pondering both sides of the argument, she’d come to the conclusion that it was a blessing.

Zane was virtually indestructible. As long as he got a regular supply of brains, he was basically immortal. His stamina was through the roof. His kind heart hadn’t been poisoned by the virus that changed him.

Then there was the hard truth that if he hadn’t been turned, they might never have crossed paths. It had been his very resiliency against threats that had prompted his boss to send him to be her bodyguard when she was being threatened.

Therefore, Zane being infected with the zombie virus was a good thing.

For both of them.

They were together. They were happy. They lived in a town that was accepting of her man’s differences.

Kissing the firm pectoral she’d been using as a pillow, Maisie laid her head back down and snuggled in.

“Okay, then. Lie still and you’ll see when the next beat comes.”

One wicked hand traveled the length of her back to cup her butt. “Or we could—”

His chuckle was accommodating, but his hand remained anchored on her ass. “You got it, Maisie-babe.”

Gawd, she loved this zombie.

And she was going to prove to him that his heart did beat. For her.

Want to see how Maisie and Zane first meet? Grab Dead Sexy to read their story or pick up Pinnacle Point: The Harker Collection to meet all of the Harker clan.