Posted May 1, 2018 by Kelly Apple in Pinnacle Point, Snippets / 0 Comments 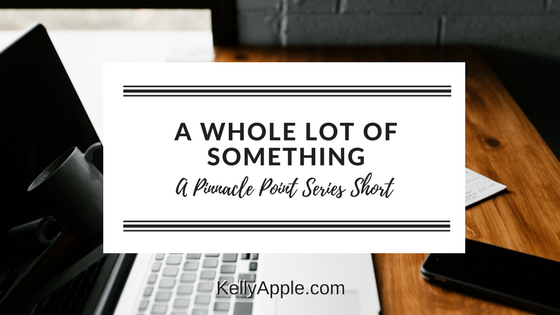 A Whole Lot of Something
Eugene and Megan
Pinnacle Point

When Megan giggled like that, Eugene knew to be scared.

There was just something so decidedly wicked in the little noise it made him afraid. If he’d been the man he was before, his balls would crawl up into his body and refuse to come out for a long, long time.

As it was, the new and improved him had balls so big crawling up into his body was not going to happen.

There was just too much of Eugene 2.0 for it to be feasible.

Adjusting himself so his dick wasn’t bent in half from the constricting pants Megan had told him he had to wear, Eugene cautiously peered around the edge of the kitchen and found his worst nightmare come to life.

Megan, the love of his life and (hopefully) mother of his future children, was sitting beside his grandmother, their heads bent close as they huddled around his laptop.

This was not good. Not good at all.

Clearing his throat, he gave Megan a wide, completely unconcerned smile when her head popped up at the sound. “What’s up, babe?”

She said it too quickly for him to believe her. And by the look on his grandmother’s face, Megan’s nothing was a whole lot of something he didn’t want to know about.

So he forced his smile to get a little bigger and nodded like he had any say in what his darling did. “Okay, then. Carry on. I’m, uhh, going out for some coffee. Did you want me to grab you anything?”

Megan gave him those big, flirty eyes he couldn’t resist. “Oh my god, yes. One of those macchiatos you got me last time. The biggest size they have.”

Right, because his Megan liked things large. Fortunately for him.

“I’ll have a vanilla latte, Eugene. With that cinnamon sprinkle on top.”

Nodding as his grandmother put her order in, Eugene edged toward the door and freedom. “No problem, grams. Cookie? Cake pop? Scone?”

They both shook their heads, identical expressions of glee on their faces.

Terrified, Eugene bolted for the door and made his escape before he found out what made a twenty-two year old woman and a seventy year old woman get that look in their eyes.

Some things were better left unspoken of.

The coffee shop was empty and Eugene had his haul in record time.

Naturally. The one time he wanted to have an excuse to stand in line, the universe wasn’t cooperating.

He took his time adding the sprinkle of cinnamon to his grandmother’s latte. He’d done it on a whim once and hadn’t managed to tell her he was the one who dashed it on, not the baristas. He thought they probably would if he ordered it, but it seemed like a lot of work and he wasn’t sure if they’d do it the way his grandmother liked.

So he always ordered her a regular vanilla latte and added the sprinkles at the little topping station himself.

You’d think being a six and a half foot tall sasquatch-like being with a ripped physique and more than adequate stamina would make him less of a social spaz. You’d be wrong.

You can upgrade the chassis and give the new frame all the bells and whistles, but the same old Eugene lived under the hood.

The only difference between the him from before and the him now was that he had a beautiful girlfriend who was into the same freaky stuff he was.

Which is to say, she liked sex just as much as he did.

Carefully putting the lid back on his grandmother’s latte, Eugene made sure his rather excessive body hair stayed out of the cup. Which sounded gross when he thought about it, but he had a lot of hair and he had to be careful it didn’t get in unwanted places.

He’d talked Megan into helping him manscape not long after they met, but the itching as his hair grew back hadn’t been worth it. Especially not when it grew back in a matter of hours.

So he learned to embrace his hairiness. Fortunately for him, Pinnacle Point was used to seeing things like a hairy sasquatch walking down the street.

They had ghosts and zombies and an honest to god herd of nightmares living in town already, what was one hairy guy who did data entry?

It was nothing. He was just another person on the street to everyone else.

He kinda liked that about his town. They were scarily open-minded about people’s differences. Even his grandmother hadn’t done much more than give his new hair growth a long look the first time she’d seen him after.

Then she’d sniffed and pointedly announced she’d need to buy those hair catchers for the drains she saw on the home shopping network so her plumbing didn’t get ruined.

Carefully balancing the coffees in the tray so they wouldn’t spill, Eugene crept into the town house and cleared his throat loudly before proceeding into the living room. He didn’t know what the two women in his life had been up to earlier and he didn’t want to walk in on anything that would scar him mentally.

His grandmother was still sitting in front of his open laptop. Megan had pulled out hers while he was gone and was typing something with a wicked grin on her face.

“So I can send Betty and Fawn invites and we can chat right in this little window?” she asked, smiling a smile no man ever wanted to see on his seventy year old grandmother’s face.

“Yep. Or you can use the private message feature built into ChatPoint itself.”

No. Noooo. Megan was NOT showing his grandmother how to use ChatPoint. She wasn’t.

That was wrong. Ten thousand kinds of wrong.

Plopping the coffee carrier down on the table, Eugene circled around and found that it was just as bad as he’d imagined.

His grandmother had set up an account and already had…Jesus, over a hundred followers. What the hell?

“Eugene, I’m very disappointed that you never showed me how fun this message site is.” His grandmother looked up and frowned. “Although I guess I should have known by how often you had to wash your sheets.”

Oh god. Someone needed to burst into the room and bash him over the head with a tire iron.

“I’m going to tell my Red Hat ladies about it so we can meet some men.”

Eugene felt a little nauseous. “You’re going to invite all your friends onto ChatPoint?”

“Yes, dear. I already jotted down some ideas for their screen names. Gertie is going to be SexyGMa. Betty will be Ready’N’Willing. Fawn is going to be BambisHoney.”

She cackled over that last one and Eugene just stared.

Looking at Megan, he tried to convey just how disturbed with his look. His darling just looked back, her wicked smile in place.

If he didn’t love her so much, he’d be upset.

“I’m going to—” He waved vaguely behind him, suddenly needing to get away. Making tracks, he escaped to his bedroom, leaving his coffee behind.

Sitting on his bed, Eugene tried to wipe the mental picture of his grandmother hooking up with some of the people he’d met online. Hell, he’d been one of the people on that site. Just…no. So wrong.

Megan slipped in, his coffee cup in hand. “If you had seen the look on your face, Stud.”

If he didn’t love this woman as much as he did, he’d hate her a little bit right now.

“Aww, don’t be mad, baby.” She slid onto his lap and toyed with his chest hair. Or maybe it was his shoulder hair. It all ran together after a while. “I’ll make it up to you tonight.”

Tonight? Hell no. That was too far away. She’d make it up to him now.

Giving the love of his life a look, Eugene rolled them so she was trapped beneath him on the bed. Megan made one of those needy noises he adored.

“Well, okay then. Maybe I’ll make it up to you now.” Hooking her leg around his hip, she grinned up at him. “Why don’t you go lock the door, Studly.”

Hot damn, he loved this woman.

Keeping his arms wrapped around her, Eugene hopped up and did as he was told. Good things happened when he obeyed his girlfriend’s orders to the letter.

Want to see how Eugene morphed into the hairy beast we all know and love? Grab Hard Wired to read his story or pick up Pinnacle Point: The Harker Collection to meet all of the Harker clan.