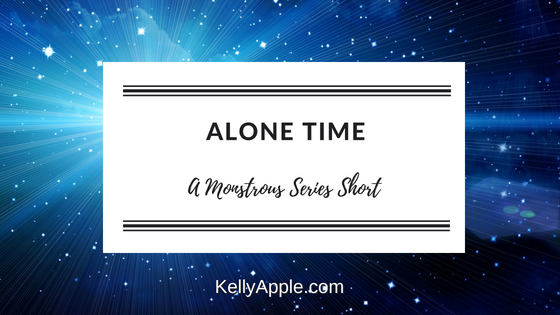 Michael and Ella had taken over one of the guest rooms in Ari and Liam’s houses months ago and Michael didn’t often find himself being in the position of being alone in the house with his mate.

There always seemed to be someone around. Ari. Liam. Akakios. Liz. Jerinth and Amanda had been coming by more often. Lon and his quiet mate and Max and his extremely exuberant mate tended to congregate here too.

For the most part, Michael enjoyed having others around. He’d grown up surrounded by packmates and wasn’t bothered by having someone constantly in his business.

But there was something to be said for knowing he could do whatever he wanted with his mate without having someone wander in while he was mid thrust. Nudity was something of a non-issue among shapeshifters, but that didn’t mean he didn’t like a little alone time with his sexy harpy.

Right now, Ella was sprawled across their bed on her stomach, her head on his thigh as she told him an amusing story about Ari mixing up a stack of dating questionnaires earlier today.

“She almost matched one of your packmates up with a siren of all things because of the mix-up. Could you imagine that?” Ella’s silvery laugh rang out as she scrunched up her nose in amusement.

Actually, Michael could imagine it. Ari had a gift for seeing something in two people that others didn’t. Maybe things wouldn’t have worked out because of the mix-up, but Ari didn’t seem to see the boundaries others saw.

She’d matched him up with a harpy, after all, and werewolves and harpies weren’t considered compatible in most circles.

Yet here they were, living the dream.

Smiling, Michael smoothed a hand over Ella’s wing. He loved the sensation of her feathers under his fingertips. There was something so decadent about their feel. He adored how the tawny gold of her skin bled into darker brown at the base of her wings and then to black down toward the tips.

Hell, he just loved this woman.

Every inch of her. Every sweet, supernatural curve.

He adored her clawed toes—something she giggled about when he lavished his attention on them. He adored her flashing eyes and wicked smile. He loved how he’d sometimes find her and Ari huddled together in a corner coming up with some sort of horribly elaborate plan that usually fell apart because Ari was too damn impatient to go through all the steps they’d laid out.

He loved Ella. Top to bottom and all the places in between.

Bending far enough to kiss her was awkward, but Michael managed it.

Luminous blue eyes looked up at him when he straightened, a sweet smile curving his harpy’s mouth. “What was that for?”

“For being you, El. For looking beautiful and making me happy.”

Ella’s cheeks flushed the delicate pink he adored and she wrinkled her nose in the way that made her look a little pixie-ish.

It was that expression all those months ago when they’d first met that had clued him in he was one hundred percent gone on Ella. When even a person’s silly expressions made someone’s heart beat harder, it had to be love.

“What do you want to do tonight?” Ella asked, the smile in her voice making him smile. “We’ve got the whole house to ourselves.”

In all honesty, Michael didn’t care what they did. While he knew he should take advantage of the alone time since it happened so infrequently, being with his mate was enough.

They could cuddle on the bed until Ari and Liam came home and he’d be happy with that.

“Whatever you want to do,” he said, toying with the stiff feathers along the outer edge of her wing.

“Ari told me where her Twister board is.”

“She said she and Liam used to play it before they got mated.”

Michael blinked again, his fingers stilling. Ari was an odd, energetic nymph, but he couldn’t for the life of him imagine her and her massive, green mate playing a game of Twister.

Ella came up to her knees, her expression caught between amusement and naughtiness. “She said they played it naked.”

Of course they did.

That one tidbit made everything make sense.

It also gave him some very wicked ideas. Ideas Ella seemed to be having too if the flush on her cheeks was any indication.

“I was thinking,” his mate went on, her already sultry voice taking on a slight purr, “we could see what all the fuss is about. I mean, I’ve never personally played that game and, although Ari explained the rules to me and everything, I might need some hands on coaching.”

Hands on? He could do hands on. He would gladly put any part of him she wanted on her.

Fabulous. The best. His mate was brilliant.

Slipping off the bed, Ella tugged on the lower tie of her halter until it loosened. The lack of a tie at the small of her back barely revealed any additional skin, but it was like a damn beacon he couldn’t take his eyes off of.

All that beautiful, gold-kissed skin called to him.

“Meet you in the living room, wolf. I’ll be naked by the time I get there. You should be too.”

She sauntered out of their room, already tugging on the tie holding the top half of her halter in place and Michael practically flew off the bed to keep her in sight.

They were alone in the damn house. There was nobody around to see the magnificent body his mate was revealing.

He wasn’t going to waste a minute of their alone time going forward.

Not a damn minute.

Want to see how Michael and Ella first met? Monstrous Matchmaker: The Complete Series has their story. (Or grab Operation Werewolf if you prefer to read it as a serial.)