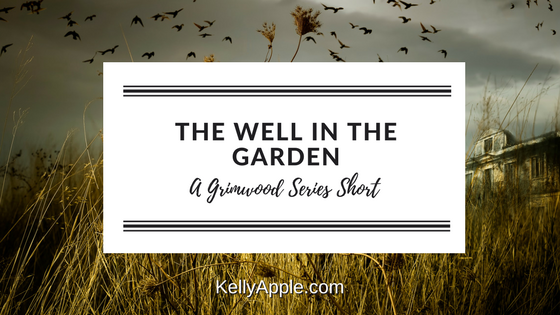 The Well in the Garden
Grimwood
Fen

The old well in the garden had always fascinated Fen.

He remembered visiting the manor house in the center of the woods as a boy. He remembered the day his mother quietly told him he needed to stay away from the well. She’d smiled her sad smile and run her fingers through his hair.

“The well isn’t safe, my darling. I don’t want you playing near it anymore.” Lorianne touched the faint scar on his collarbone, her expression darkening.

The scar was courtesy of a fall he’d taken from the big tree on the side of their house in town. Two days after he’d injured himself, workmen had come and laboriously chopped it down.

Watching from the window, Fen had sniffed back tears as his escape from reality was butchered a limb at a time.

Nodding dutifully, Fen left his mother in the garden and made his way inside. The woman who ran the kitchen took pity on him and his drawn expression and wrapped several slices of her warm cinnamon bread in a cloth.

“There’s no one in the ballroom, Master Fen. Perhaps you’d like to take your snack in there.”

No one in the ballroom sounded like heaven to Fen. He could eat his treat in peace. His mother wouldn’t sweetly tell him to slow down and chew his food more carefully. His sister wouldn’t look at him with her wild eyes, her smile disturbing.

It had been years since that day. Years. And still, Fen felt like the same boy who’d been desperate to sneak away for some time alone.

Today, his mother had left him to his own devices. She’d sent him off on his own and gone to the library with Isobel.

So Fen did what any other curious young man would do in his circumstances. He’d slipped out the front door when no one was around and made his way to the garden hidden behind the great house.

It had been several months since he and his mother had made the long journey to Isobel’s hiding place. His sister hadn’t seemed thrilled to see them, but then she rarely looked thrilled about anything. She watched him with her unnerving stare, the dark lines on her wrists barely hidden by the sleeves of her dress. When their mother had called her to the library, she’d hesitated, expression going from fierce to uncertain.

Still, her uncharacteristic behavior wasn’t enough to dissuade Fen from exploring the garden without his mother’s watchful eyes on him.

So he ran. He darted from bush to bush—easier now that there were fewer gardeners around to care for the great lawns and flower beds. As he hovered at the corner of the house, checking to make sure he wasn’t being observed, he frowned at the orchard. The trees looked…sad.

The last leg of his journey felt less like a rebellious bid for freedom than his first steps out the door. The old house and the grounds were getting old, he realized. He’d been coming here since he was a child and every year there were less and less servants to keep the place up.

How did Isobel stand it? How could she bear to be cloistered away in this depressing place?

The only part of the old house he still found fascinating was the garden with the old well.

From the looks of things, neither Isobel or the servants had been to this corner of the garden in a very long time.

Long grass had sprouted around the base of the well. The wooden cover his mother had commissioned one of the nearby townsfolk to make years ago had been weathered by time and sun.

Still, the well held a wealth of mystery to Fen.

Checking to make sure he wasn’t being watched, he crept around the back of the well, the farthest from the house he could get while still remaining in the garden. Brushing off a wide, flat stone nearly hidden by the long grass, Fen settled in. The stones at his back weren’t comfortable, but they were comforting. There was something solid and permanent about the old thing.

Something that nearly begged him to stay longer.

If only he could.

He knew his mother would come looking for him soon. As much as he might crave solitude, Lorianne would become frantic if she couldn’t find him.

He’d take the precious moments he could find and gather them close. And when his mother called to him, he’d come.

No matter how loudly he heard the siren call of the well begging him to stay.

Have you met Fen yet? His story (and his romance) unfolds in Cursed Lives.