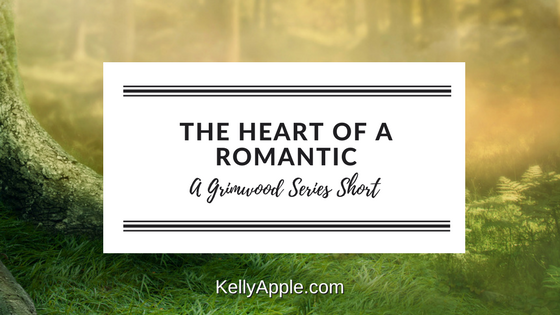 The Heart of a Romantic
Grimwood
Adria and Micah

Micah wasn’t as subtle as he believed himself to be.

Adria always found it amusing when he’d try to act like he wasn’t up to something when he clearly was. He might be brilliant, but his ability to lie to her convincingly—whether it was about a small thing or something more important—was severely lacking.

That was probably a good thing, she thought as she watched him skulk around the side of the house, one of the oversized baskets she used for harvesting in his hands.

When she heard the root cellar door bang open and him curse roundly at the noise, she had to clamp a hand over her mouth so she wouldn’t alert him to her presence with her laughter.

Yep, her man was up to something.

Something that would end up being sweetly romantic, if she had to guess. A quiet evening out in their favorite spot on the ridge, perhaps. Or a picnic dinner on the floor of the cabin.

Either would delight her, to be honest. But then, any time spent with Micah was a delight.

“Leave the boy to his schemes, Adria, and help your old man finish the fence.”

Adria jumped guiltily at her father’s voice. He was watching her from inside the goat pen, his brows drawn together in a frown even though she thought she saw the hint of a smile around the edge of his mouth.

She blinked at him silently as she scrambled to find something that wouldn’t make her seem like she was the one skulking about watching her husband for no other reason than she could.

“Come along, girl. He’ll tell you what he’s up to soon enough.”

Micah might be terrible at subtlety, but she wasn’t much better. Her mother and father always seem to catch her admiring the way her husband’s trousers clung to his backside or drooling over his impressively large biceps when he was out chopping wood.

She was learning to live with the embarrassment of her parents knowing she liked Micah for more than just his mind.

“Do you know what he’s planning?” Adria asked as she joined her father at the pen.

Her father’s grunt could have meant anything, but Adria thought it was an affirmative.

“Sometimes a man likes to surprise his woman and that’s all I’m going to say so you might as well stop begging.”

It was more than she expected to get out of him so Adria gave in. Gracefully, even. “Fine. I won’t ask anymore.”

But it wouldn’t  stop her from speculating.

As her father maneuvered a new board into position to replace one that had broken and Adria quickly stepped up to secure it, she concocted scenarios.

Perhaps, Micah was packing up rations for a new journey he was going to ask her to join him on. Believable, seeing as how he liked to travel to all parts of Grimwood to hear the legends of the great wood.

But that didn’t seem like much of a surprise. No, if that were the case, he’d just up and ask her if she wanted to head down the mountain because he heard from someone there was a woman whose great-great-grandfather had been a tree sprite…

Stifling a smile, Adria expertly wound cording around the new board to hold it in place. Her Micah did hear the strangest tales, didn’t he?

Ones so fantastic even she—a woman descended from a bloodline who could become wolves when the moon ran full—didn’t always believe they could be true.

A family descended from the spirit of a tree? Pure fairy tale.

Her beloved husband stood behind her, his smile so wide her heart leapt in response to his excitement. Her father grunted and said something under his breath before heading off to the other side of the pen to give them some privacy.

“Micah,” she said, her own smile stretching her mouth until her cheeks ached.

“Come on. I have something for you.”

Of course he did.

Sliding her hand into his, Adria let him lead her to the old root cellar. The doors were propped open and a faint glow lit the dimness below.

Curious, she followed him down, grinning when he gruffly told her not to look until he’d closed the doors. She watched him instead of sating her curiosity.

The heavy muscles in his shoulders bunched and strained as he carefully closed them in and she thrilled all over again that this magnificent man was hers.

When he took her hands and led her deeper into the cellar, Adria drank him in. The size of him. The breadth of his shoulders.

The aura of competence that was pure Micah Redfield.

Buried under all the gorgeous outward trappings, lay the heart of a romantic.

Eyes shimmering, Adria took in the scene he’d set up for her.

A picnic, indeed. Her harvesting basket sat to the side of the old blanket they used when they traveled. She could smell her mother’s bread and the mouthwatering scent of her stew wafting from it.

He’d brought the strange glowing lichen they’d found in a cave on one of their travels and blanketed the place with it.

It lent the normally dim, utilitarian place a romantic, unearthly glow and Adria loved it.

Just like she loved the man standing in front of her.

He grinned and cocked his head at the basket. “Hungry? Your mother made the stew you love. I caught the rabbit myself.”

That said a lot. Her Micah wasn’t much of a huntsman.

“Starving,” she whispered, still lost in the beauty of what he’d created for her.

Her mother’s food would likely be delicious, but it was the man in front of her she was hungry for.

Putting her hand on his arm, she led him now. The blanket was old and scratchy, the sturdy thing having seen more than one tryst in its days.

That day, in the root cellar of her cabin, it saw one more.

Want to see how Adria and Micah’s romance begins? Grab Cursed Touch to read their story.

2 responses to “Grimwood Short – The Heart of a Romantic”