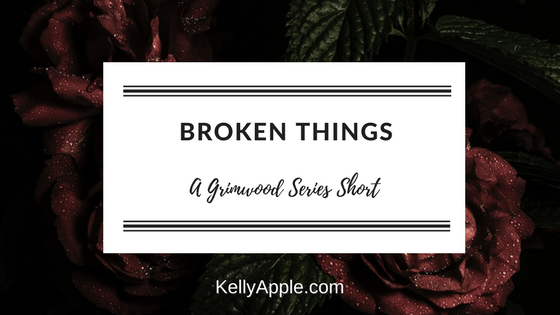 Memories met Isobel around every corner as she and Cade worked on clearing out the decades of dirt and dust that had accumulated in the upper rooms. The dirt and dust would have been enough of a challenge on their own, but the broken pieces of her old life were also everywhere.

The old spindle left discarded on the stairs that the servants had spun thread on reminded her of when the halls of the old manor house had whispered with voices and life.

The spindle was broken now. Probably by her in one of her rages.

Isobel didn’t like to remember those times. In part because there were terrifying gaps in her memory. Entire seasons lost to her madness. Her rage. Her hatred of what was happening to her body and mind.

But the truth couldn’t be ignored when it stared at you from the cracked remains of something that had once been integral to life in the manor.

Averting her gaze, Isobel focused on the long hallway at the top of the stairs.

Think of Cade and how he gave her the strength to find herself again in the depths of her madness.

Think of the green growing things that now blanketed the old garden out back.

Broken things could be repaired with a little love and a little luck. And sometimes a healthy dose of magic.

Isobel focused on the man who gave her such joy. He’d wandered into the one of the rooms earlier while she’d been complaining about all the junk they’d have to haul away to make the upper levels habitable again.

She’d been ready to declare the second and third floors a loss and retreat to the tower above the library. But Cade had laughed his gentle laugh and told her it was a shame to have all these beautiful rooms if they were never going to use them.

So she’d stopped her bitching and grabbed one of the brooms they’d brought from downstairs and begun wrangling the dust into a pile to be easily scooped up.

Then she’d seen that damn spindle and…

Hell, she was a mess.

It was only a stupid spinning wheel. Nothing special. So what if the servants used it back when the house had been less a falling down mess.

The past was the past. Now was what she needed to focus on.

Isobel started, Cade’s face swimming into view. She’d lost time, hadn’t she? He’d been down the hall and now he was right in front of her, the beginning of a frown pulling down the edge of his mouth.

His frown didn’t smooth out and those eyes that saw too much searched her face for a long moment after her declaration. Then he reached out and cupped her jaw, his warm palm just what she needed to banish the last of the shadows from her mind.

“Why don’t we work together for a while, love?” He smiled and leaned in for a soft kiss.

His kisses did things to her. They settled the beast beneath her skin and made it purr in enjoyment.

Yes, they could work together. But what would happen tomorrow? What if she never found the strength to do it on her own?

Her beautiful mate narrowed his eyes at her and Isobel knew he could read her like a book. He knew the stray thought that flit through her head. He was preparing his arguments against it.

“Not forever, Bel. Just for now. Today. We’ll take tomorrow as it comes.”

Damn him and his perception. He really could read her as easily as one of her mother’s journals.

“I can’t lean on you forever,” she said, more because she thought she should than because she didn’t want to spend the day by his side.

He probably wouldn’t, the silly man.

Whatever had led Cade to her abandoned manor all those months ago must have known just how perfect he was for her. Against all odds, he loved her without reservation. He never fled when her beast roared and growled. He never flinched when she got frustrated and threw the cooking pot against the wall after she ruined yet another meal.

He was patient and kind and he saw her in ways she had forgotten to see herself.

Giving in, Isobel took his hand and tugged him down the hall. He’d been checking the rooms, hadn’t he? She could stand beside him and do that much, at least.

And if the rooms happened to have a bed? Well, it was only right they checked that out, too.

Memories banished for now by Cade’s quiet strength, Isobel let her mate tell her his plans for this floor. Long-term plans.

Plans that painted a future that was brighter than anything she’d ever dared hope.

Beneath her skin, her beast settled, content with the new life she and Cade were going to make.

Want to see how Isobel and Cade first met? Grab Cursed Bones to read their story.