Posted May 8, 2020 by Kelly Apple in Feature Friday, Grimwood / 0 Comments

MAN, I liked writing these two.

Fen’s the snarly loner who hides a boatload of hurt at how circumstances (and those pesky curses) have treated him. He’s sort of reached that point where he’d rather ignore the world than be deserted by yet another person he loves. (To be fair, a lot of those who did the leaving didn’t do so because they wanted to. Curses, man, they’re cruel beasts.)

Gretchen, on the other hand, is carefree and alive in a way Fen can hardly wrap his head around. And she won’t.leave.him.alone.

Yeah, the guy never stood a chance. From the moment she stumbled over his cabin in the woods, he found himself being reluctantly dragged back into living.

And that is an EXCELLENT thing considering his needs to fulfill his part as a Grimm in order to banish the curse. 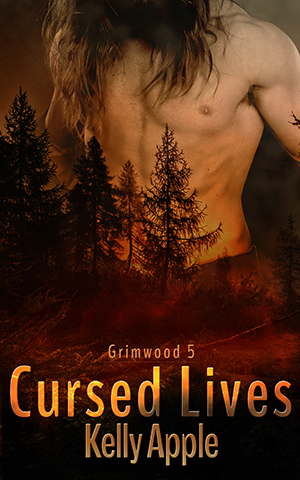 Growing up wild in Grimwood, Gretchen Malloy knows her corner of the woods like the back of her hand. Stumbling over a previously undiscovered cabin to explore is the highlight of her lazy summer days.

Only, the cabin she found isn’t empty and the brooding, angry man who chases her away is almost too much excitement for her tastes. For all she might not be wanted, Gretchen’s terminal curiosity sends her back again and again until an unexpected friendship blossoms.

Fen Grimm knows exactly what he is—the crusty old loner who’s given up on the world outside his cabin and who wants nothing to do with Grimwood or any of its many inhabitants. He’s already loved and lost enough and he has no need to watch another mortal age and die before his eyes.

If only Grimwood didn’t need him, he’d be content to live out the rest of his long days alone. But when the magic in the wood calls, a Grimm must answer.