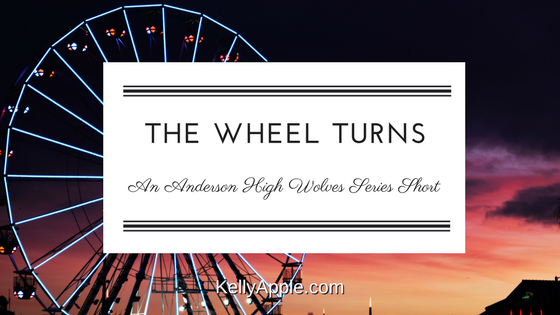 “Trust me, Nat. You’ll have fun. Just try to relax a little, okay?”

Natalie did trust Mason. Absolutely. But she didn’t know if this type of outing was something she’d enjoy. As for relaxing, it wasn’t like she wasn’t trying, but keeping an eye on the horde of Mason’s younger brothers and sisters was hard.

Those little wolves could run fast when they saw something they wanted.

Heart in her throat, she watched as Mia, the youngest of the girls, scaled a small fence and dropped into the goat enclosure.

Before she could open her mouth to point out what Mia had done, one of Mason’s other siblings was there to pluck her out. Natalie could hear the scolding Mia was getting from where they stood and she blew out a long breath before plastering a smile on her face and sliding her hand into her boyfriend’s.

Mason had asked her to come to the county fair and she was darn well going to have a good time. Even if it killed her.

They were on a date. A date at a dusty, loud venue, surrounded by the entire clan of Armstrongs and she wasn’t going to let her nerves ruin it.

Mason tugged her away from the chaos of the front gate and angled them toward the line of people waiting to get on the Ferris wheel. “You look like you’re preparing for battle.”

Going out into non-enclosed spaces with Mason’s brothers and sisters sometimes felt like that.

Natalie loved the entire Armstrong horde to pieces, but watching over them when they were free to get into trouble frayed her nerves. Mia could have been hurt, for goodness sake.

Okay. She wasn’t trying nearly as hard as she could be. Natalie liked people and crowds and being in the middle of things, but the controlled chaos of the midway was a little overwhelming. She could do better.

“I’m fine.” She’d fake it until it became the truth for her beloved wolf. “I think I’m in sensory overload at the moment.”

Without a word, Mason tucked her against his side and that little white lie she’d told him just moments ago edged closer to being the truth.

Being with Mason did make things fine. Having his big body curved around hers made her feel safe. Protected. Anchored.

Warm lips brushed over her forehead. “You ready?”

They’d made it to the front of the line and Natalie nodded. Sure. She’d get in a swinging death trap for her man. Love made people do stupid things sometimes.

Stupid or not, she was going in.

The cage creaked when Mason settled onto the seat. Natalie told herself the attendant hadn’t glanced up at the support struts in concern. Still, she took Mason’s hand in her own as soon as he was seated. If something happened to this thing, he was the one who was going to save her. Holding onto him made sense.

The cage jerked and rose in the air. Natalie wondered how many more cages had to be unloaded and loaded before the ride could start.

“It’ll be okay.” Mason pried her fingernails out of his hand and gave her a calm smile. “Trust me.”

Easy for him to say. He had super healing and probably wouldn’t die if they—

Mason’s mouth stopped her grim thoughts in their tracks. His kiss soothed away her fear and had her turning toward him with an eager moan.

“See?” he whispered when they parted. “Everything’s okay.”

It was. It really was.

With a smile, he turned her face so she was looking out at the scenery instead of him. For a moment, Natalie couldn’t breathe. They weren’t at the apex of their climb yet, and the city was already laid out before them like a glowing map.

Streetlights stretched down the roads. Stoplights cycled through their colors. The sun had just dipped below the horizon and their little town looked like it was coming to life.

“It’s beautiful,” she choked out.

The wheel shuddered and began to turn and, for a moment, Natalie wanted to cry. She hadn’t gotten enough of it. A few more seconds was all she was asking.

At the lowest point of the ride, she could smell popcorn and something sweet. Her stomach rumbled and she mentally reminded herself to ask Mason to track down whatever that outstanding smell was.

Then they were rising again and she forgot all about food.

Something about the straight line of lights marching down the streets and the cars zipping between them captivated her. She loved it.

With a delighted laugh, Natalie turned toward the love of her life and smacked a kiss against his lips. “Thank you,” she said, her smile making her cheeks hurt. “Thank you for showing me this, you beautiful, perfect man.”

Mason’s smile might not have been as bright as hers, but Natalie felt it down to her toes. The man was downright lethal when he smiled. And if he smiled while taking down his hair? Hoo-boy! Or while taking off his shirt? Well, Natalie Lombard wasn’t one to swoon, but she’d very nearly done just that a time or two when her man flashed his pearly whites and some skin.

Holy shit, they needed to get out of this cage before they gave the people on the midway a show of the X-rated variety.

Instead of listening to herself, Natalie leaned in and smacked another kiss against her wolf’s tempting mouth.

“How long do we have to stay at the fair, Mason?”

Her big wolf’s massive chest expanded as he sucked in a deep breath. “Nat—”

He swallowed. “Just a little while. Not long.”

He sounded like he was being tortured. Poor guy.

Whether they stayed for hours or left as soon as they got off the ride, Natalie didn’t care. As long as she was with Mason Armstrong, she’d be happy.

Settling back into her seat, Natalie smiled as she watched the city blossom before them again and again.

Want to see how Natalie and Mason found their way together? Pick up All the Reasons Why or Anderson High Wolves: The Complete Novella Collection.