Surprise! We’re popping back over to Jenny and Evan for a little Thanksgiving fun! 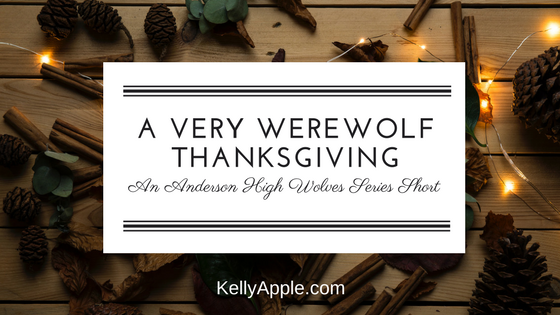 “So you guys do this every year?”

Evan looked at Jenny and gave her the type of slow nod that meant he understood her question, but he didn’t understand why she was asking. Jenny knew where his confusion was coming from. She’d been with him last year when his family had done this exact same thing, so she should know they do this.

But she hadn’t realized it was a tradition. She’d thought the big dinner and houseful of wolves was something they’d done special. For her.

To help her acclimate to her sudden introduction into the pack.

Her life had been so…so fraught with upheaval for so long that she hadn’t realized people still did stuff like that. Between her mom’s illness and her stepdad’s general douchery, Jenny had forgotten what normal families looked like.

Not that the Carmichael’s were “normal” by any stretch of the imagination.

They were wolves, for goodness sake. Beautiful, wild werewolves.

And they were loads better than any of the people Jenny had been forced to associate with before her stepfather met with his unfortunate accident.

So, yeah. Werewolves, apparently, liked to go all out at the holidays.

Which made sense, if Jenny thought about it.

Wolves liked to eat and getting everyone together for a Thanksgiving meal was an excellent excuse to do just that. The guys did the football in the backyard thing. The adults drank bear and were just…nice. Everyone came together and they ate and drank and there was no yelling or muttered comments about how useless she was.

“Not normally, but I’m sure she’d love to have you offer. If you want to help that is.”

Her man sounded so adorably cute when he was trying to make sure she was okay with the things that were happening around her.

“I don’t know how to make much more than sandwiches and pasta, but I can help her chop if she needs it.”

Taking her at her word, Evan hopped up off the bed they’d been lounging on and held out his hand. “We’ll see what she wants us to do.”

That word always made her light up inside. Them. Together. Evan and Jenny.

Sliding her hand into his, Jenny floated down the stairs, basking in the them that they were the whole way.

“Ma, Jenny and I wanted to know if you need any help.”

Addy Carmichael looked up from the counter and raised a brow. “You, Evan? You want to know if I need help cooking?”

“Ahh, well, Jenny was wondering if she could help and I figured…”

When he trailed off, a flush moving down his cheeks, Jenny had to bite her cheek to keep from laughing. The way Evan’s mom called him on his bullshit was just one of the things she loved about the woman.

“You figured that you were going to be hanging around anyway and you should make yourself useful.”

“In that case, son of mine,” Addy said, standing and gesturing him over, “you can finish mixing the filling for the pie.”

Evan bussed a kiss against Jenny’s cheek before taking his mother’s place. For all Addy’s teasing, Evan seemed to know what he was doing since he didn’t ask any questions before settling in to mix the gooey mess in the bowl.

“What do you want me to do?” Jenny asked quietly.

“Have you ever made pie crusts before?”

She shook her head.

“Hmm. Okay. Why don’t you get started on the potatoes, then, while I work on the next batch of crusts? We need those two bags peeled and cut.”

Next batch of crusts? Jenny glanced into the attached dining room and boggled over the pies already cooling on the table. She’d known this was a large event last year, but she hadn’t realized how much Addy had made.

Smiling at her, Addy pulled out a clean mixing bowl and began measuring. “How are things going at school, dear? Evan doesn’t tell me anything anymore.”

“Keep mixing, Ev. I need to get those pies in before I can start on the next.”

Ducking her head so Evan wouldn’t see her laughter, Jenny began peeling the mass of potatoes. “Everything’s good. Not as hard as I was expecting, really.”

“Good. Have you decided on a major yet?”

She hadn’t. Psychology interested her, namely child psychology, but so did several other things. “Not yet.”

“Well, there’s no rush at this point. You just keep working on your general ed requirements and the rest will figure itself out.”

Things would work out. Whether it was planning a meal for a house full of hungry werewolves or figuring out what she wanted to do with the rest of her life.

With the support of Evan and his family, she could do anything.

This was an off-the-cuff short I wrote earlier in the year and sort of forgot about until I was digging through some of my docs. LOOK! Jenny and Evan. Those two are so cute together.