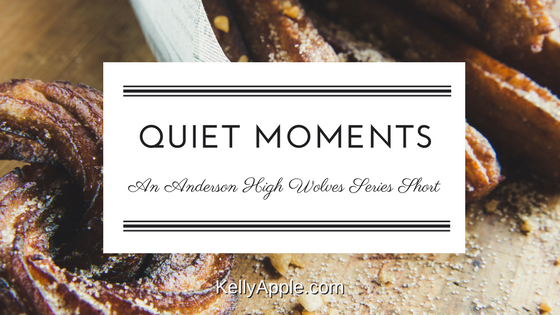 Lane hadn’t been to a fair since before the fire. Walking through the gates and breathing in the aroma of popcorn and dust brought what few memories she had forward and she smiled.

It was the smell of hot summer days and giddy exhaustion.

Linking her fingers with Matty’s, Lane watched Evan haul Jenny off toward the rides while Natalie and Mason went toward the Ferris wheel.

Natalie looked ready to pop at any moment and, for a moment, Lane felt sorry for her. A fair was a long way away from the type of things the former cheerleader had done with her previous boyfriends and she looked as out of place as Lane usually felt.

Then Natalie and Mason were swallowed up by the crowd and it was just Lane and Matty.

“What do you want to do first?”

First? Lane didn’t know. Eat her weight in churros maybe. Or get one of the brightly colored slushy drinks they were selling next to the popcorn stand.

She wasn’t here for the rides, although she figured Matty would want to go on a few of them.

Honestly, she didn’t care what they did first as long as she got to do it with Matty.

Matty being the wonderfully observant boyfriend he was, started in the direction of the churros and slushy drinks. “Evan’s probably heading toward the haunted house. He loves trying to figure out how they make the effects work.”

The haunted house didn’t sound fun, but Lane put on a smile. “Do you want to go in it?”

Matty slanted her a look out of the corner of his eye. “Not really. But if you want to go, we can.”

“I’m good.” She was, too. Lane would be happy grabbing a seat at one of the tables loosely grouped in the courtyard and sitting there to watch all the people passing by.

Another enigmatic look. Before Lane could ask him what that look was for, they were at the churro stand. Matty ordered—far more than she would have—and once they had their precious cinnamon and sugar dusted loot he turned waved her toward a table.

“I’ll grab drinks and find you.”

Arms full of sweet, fried dough, Lane nodded. She’d already spotted the table she wanted to grab. Tucked into the corner so they’d be out of the way, but still able to see the people laughing along the midway. A brief detour for napkins and Lane was soon lining up Matty’s churros on the tabletop even as she took a big bite out of hers.

A red slushy drink was placed in front of her, the straw an elaborate twisted curl rising up from the lid.

“I sprang for one of the silly straws,” her gorgeous, brilliant boyfriend said. “Do you like it?”

Did she like it? It was magnificent. Three loop-de-loops and a bright sparkling red. It was childish and perfect in every way.

A flash of straight, white teeth and then Matty was sliding onto the hard bench next to her. “Good. Because if you didn’t, I’d go get you another one. And if you didn’t like that—”

Lane got it. He’d keep trying until she was happy.

Feeling bold, she leaned in and pressed a kiss to his mouth. Her boyfriend was sweeter than she deserved and there was no possible way she was ever willingly giving him up.

The man was stuck with her. Through thick and thin. Rain and shine.

They fit. With him, she felt like a whole person, not the hollow shell she’d once been.

Warmth crawled through her. Beautiful. Before Matty, she couldn’t remember anyone calling her that.

It wasn’t just a throwaway word for him, either. He actually thought she was beautiful. Perfect, even with all her flaws.

That was love, wasn’t it? Caring for someone even when they made mistakes. Loving them though whatever life through at them.

As much as she wanted to wrap her arms around her wolf and hold on, Lane didn’t. She’d used up all her boldness with that little kiss and it would take time for her to work up to another public display of affection.

Matty knew. He winked at her as he took a bite of his first churro and Lane laughed. Yeah, Matty knew her well. He knew she wasn’t here for the rides or the crowds. He knew she’d only come because he’d asked her to.

And he was okay with that. Her skittishness around people she didn’t know—and some she did—didn’t put him off. He accepted her. He loved her.

As Lane worked her way through her treats, she alternated between watching Matty eat and watching the people walking past.

The world was weird and unexpected sometimes. Who would have guessed that she’d end up with this wolf? Happy?

Not her, that was for sure.

But here they were.

A couple. Ready for face whatever life threw at them as a team.

Content, Lane slid her sugar dusted hand into Matty’s and leaned her head on his shoulder. She didn’t care that her hands would be sticky later or that anybody that looked over would see them.

For the moment, she just was.

And it was perfect.

Want to see see how Matty and Lane ended up together? Grab The Girl Most Likely for their story or Anderson High Wolves: The Complete Novella Collection to meet all the wolves of Anderson High.