Today’s my birthday and to celebrate I’m giving YOU a gift. Another Anderson High Wolves Mason and Natalie short.

Originally, the little scene with Natalie giving Mason some questionable underwear was supposed to be a standalone snippet. Except…then I wanted Mason to give Natalie something. And that something ended up taking several short scenes to write. The best laid plans, right?

Anyway. I have shorts scheduled through the end of October, by which time Mason and Natalie (probably) will have gotten their gift giving out of their systems. Maybe. I’m looking at this like a short story in four parts. This part features Mason as he works on getting together his gift for his mate. 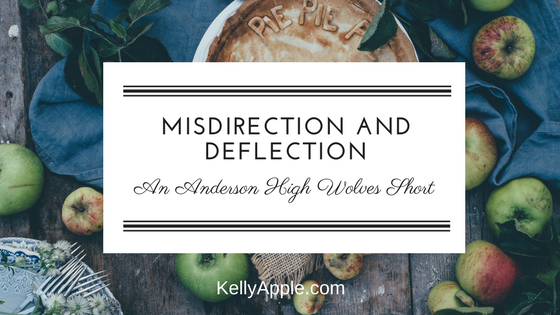 Mason wasn’t crafty like Natalie was. If she were a wolf, she’d be the one who toyed with her food before eating it. He, on the other hand, went straight for the kill without messing around.

Fingers running over the bumps and whorls of the piece of wood in his grandmother’s shed, he couldn’t help the grin that slid over his face when he imagined Natalie’s reaction to his gift.

She liked gag gifts—the 3D wolf’s head underwear she’d given him not too long ago was proof of that. He’d agonized over what to get her for weeks before he’d chucked the gag gift idea and went with his strengths. A wolf could only be taught so many new tricks, after all.

On the other hand, pulling off his gift idea without her figuring out what he was doing appealed to the hunter in him.

He might not be blessed with the sly craftiness his mate had, but he did enjoy the hunt.

Misdirection and deflection. Make her look to the left while he feinted to the right.

His grandmother had laughed when he enlisted her help. She’d become his willing partner for Operation: Gift Exchange and his respect for her abilities as a hunter in her own right skyrocketed.

Nobody would ever say that age softened the Armstrong family. Not when they saw how expertly Vivienne Armstrong kept Natalie distracted while Mason put together his gift to her.

He wasn’t ashamed to admit he envied Natalie’s proximity to the pies his grandmother had enlisted her to help with, though. His grandma made some good pie.

Stomach sending up a warning rumble of discontent over missing out on pie, Mason ran the sander over the next set of whorls to smooth out the rough edges.

He thought—hoped—Natalie would like his gift. His grandfather had hacked out the rough shape to help him along and Mason had spent every stolen minute he could find refining it.

A cut here, a smooth line there.

His wolf rumbled in approval when he stepped back to admire his work. She’d like it. His mate had a sweetly romantic side under the prickles and thorns she coated herself in.

He’d seen less and less of those thorns since she moved completely out of her parents’ house. She hadn’t cut her mother and father out of her life completely, but she had laid down rules for them if they wanted to continue having a relationship with her. Neither her mother nor father had been happy with how she stood up for herself, but so far they were respecting her wishes.

Mason still saw red when he thought about what Natalie’s mother had tried to force her to do. He disliked her father because he’d gone along with Gina Lombard’s plans, but the bulk of his anger was directed at the woman who’d nearly broken his mate.

Jaw clenched, Mason put the sander down so he wouldn’t ruin his surprise for his beloved. Destroying the smooth lines would be a tragedy after everything he’d done to make this work.

Breathe in. Forget about the past.

Breathe out. Natalie had survived everything thrown at her.

She was strong and brave and she was learning it wasn’t a weakness to lean on someone when times got tough.

He needed her. Now.

Pulling off his eye protection, Mason laid the glasses on the long table pushed against the wall. He tossed a tarp over the gift so the surprise wouldn’t be ruined if Natalie peeked in.

Then he set out to find her.

Natalie Lombard. His strength. His mate.

If he had anything to say about it, she’d be an Armstrong before too long. The next in a line of women who’d chosen to stand by the men in his family.

They’d discussed it already. Natalie wasn’t convinced getting married yet was necessary. She wanted to get a few semesters of college under her belt before they made that commitment.

Part of him was happy to oblige her.

What they had right now was good. She was already his. He was hers. No other woman came close to holding a candle to her beauty and drive. No other female—human or wolf—had ever captured his wolf’s attention the way Natalie did.

But another more primitive side wanted the additional tie. He wanted to be able to call her his wife.

Taking the back steps in a few long strides, Mason was hit by the smell of cinnamon and apples as soon as he opened the door.

Sweet hell, they were making apple pies. Maybe he could flatter his grandma into sending one of those beauties home with them. It wouldn’t last long in his house, not with the hungry horde of his brothers and sisters, but he’d savor every slice he could get.

His grandmother looked up when he walked in, but Natalie didn’t twitch. She had a smudge of flour on her nose and she was concentrating so intensely at the thin round of dough laid out in the pie tin, she never looked up.

Unable to stop his smile, Mason savored the jolt of surprise that went through her when he slid his hands around her hips. “Hello, beautiful,” he murmured.

Vaguely, he was aware of his grandmother giving them her back as she pretended to be engrossed in venting the top of a pie about to go in the oven. She was distant, though. Not a threat, at least.

Every molecule in Mason’s body was focused on Natalie and the bright eyes peering at him over her shoulder.

He loved her voice. It slipped over him like silk, teasing his senses and making his wolf want to howl.

“Almost done?” Jesus, his voice had gone rough. He sounded like ten miles of bad road.

Natalie must have heard it because the fine hairs on the back on her neck stood up and a shiver coursed through her. “With this one. I think grandma wanted to make a few more, though.”

He loved that she claimed his grandmother as her own.

Brushing a strand of hair that had fallen out of her pony tail aside, Mason nuzzled the sensitive spot behind Natalie’s ear. “Find me when you’re done.”

His voice might be rough, but hers had gone breathless and soft. “I will.”

Another gentle press of lips against skin and he let her go.

If he stayed focused, he might be able to finish his gift to her by the time the pies were done. He was ready to give it to her. Ready to see her face light up with delight at his creation.

Rumbling out a greeting and a goodbye to his grandma, Mason went back to the shed.

Focus, dedication, and hard work were his mantra for the next few hours.

With a little luck, he’d have his beloved mate’s gift done the next time he saw her.

Next week’s short will feature the wily Natalie. See you then!