I’ve had the big, brawny Mason in my head for the past couple of days. Mostly because I saw a picture of something and started laughing when I imagined Mason wearing it. I mean…well, you’ll have to read the story to see what I mean. I’m still laughing, okay? STILL LAUGHING OVER IT. HARD.

Okay. Enough of my giggling. ENJOY! 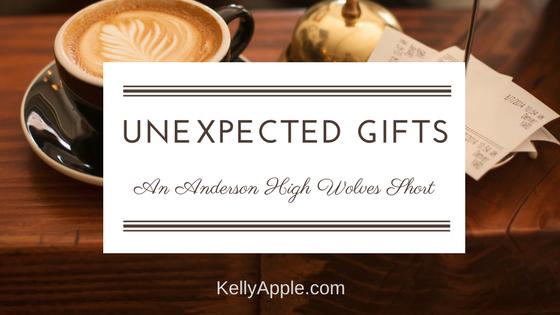 Mason stared at the box sitting in the middle of his bed with something akin to horrified fascination. He loved his mate, he really did, but her gifts to him left him somewhat perplexed.

Last time, she’d bought a subscription to a streaming service and had gleefully told him they were going to spend the weekend watching a handful of series he’d never heard of. They hadn’t necessarily been terrible, but sitting still for that long had almost been torture—one he endured for her with only a little grumbling—and Mason wondered what Nat was up to now.

Squatting, he examined the box from several long strides away.

Not big. The paper it was wrapped in was a roll his mother had stashed in the closet off the hallway. He wasn’t picking up any suspect smells, but Natalie knew how good his nose was. If there was anything with an odor, she was smart enough to hide it elsewhere and leave an IOU in the box.

His love might have strange tastes in gifts, but she was crafty.

Edging closer, he poked it with a finger.

Nothing. Fairly lightweight, too, if the ease of movement was any indication.

Natalie’s sweet scent drifted to him and he smiled without turning. He knew she was leaning against the doorframe, watching him study her gift.

He’d heard her creep up the stairs, her muffled giggles as much a giveaway as her footsteps.

Several months ago, she hadn’t laughed like that. Her world had been brittle and narrow, her eyes haunted. Now her smile was more real. It flashed with ease and the bitchy personality she’d wrapped herself in to keep others away had softened.

This was the Natalie he’d known was hiding under the surface all along.

“It’s not going to bite,” she whispered and Mason clenched his jaw to keep from laughing out loud.

She sounded so excited, he couldn’t help but warm. Being around Natalie heated his blood in every way imaginable, so this wasn’t a surprise.

Not to him at least.

Sometimes, Nat still got that dreamy, faraway look in her eyes when she thought he wasn’t paying attention. It was a look that said she didn’t understand how she’d gotten so lucky.

In truth, the luck was all his.

He’d watched Natalie date her way through the football team and he’d despaired she’d ever see him. Really see him. Not just as the biggest and quietest on the team, but as a man who could match her in the most fundamental way.

When she’d finally opened her eyes, he’d rejoiced. When she’d dropped her shields and let him in, his world had snapped into focus.

Natalie Lombard was his. Body and soul. She’d given her heart to him and he was determined to keep that fragile organ safe until time itself ended.

Statistically, he knew the odds of finding a mate in high school were low. But then, Werewolf matings were half biology, half instinct and want.

He’d wanted Natalie since the first time he’d seen her as female. He’d bit his tongue and bided his time and his patience had rewarded him with the greatest gift a person could ever receive.

It made enduring weekend long binge sessions of TV shows he’d never heard of worth it.

He loved his mate. Endlessly.

Their freshman year of college would be starting in a few weeks and he rubbed his hand over his jaw as he imagined walking her to class. Holy hell, he wanted to do that. He loved tucking her smaller form against him in public. He loved how she melted into his side, her body warm and soft, her arms tight around his waist.

Poking the box again, he schooled his expression as he glanced over his shoulder. “’S not my birthday.”

Her shrug was pure poetry. It still stunned him that he had her beauty and grace in his house. In his life. In his bed.

“I saw it and couldn’t resist.” Her expression went crafty. “Besides, it’s as much a gift for me as for you.”

Mason couldn’t stop his eyebrow from cocking up. He knew he voice had gone deeper. It rumbled out of his chest when he spoke. “Is it?”

Almost a purr, nearly a growl. Natalie shivered and he saw naked want on her beautiful face.

The only thing he regretted about Nat living with him in his parents’ house was that they were so rarely alone. They had the hours between when his brothers and sisters went to bed and before his mom got up in the morning to show how much they loved one another. They had stolen minutes in the garage and the occasional heavy make out session in his truck when they could wrangle trips without his siblings.

Any gift that was as much for her as for him was bound to want him to show her how much he adored her. In the most carnal way imaginable.

His two youngest sisters were downstairs with his mom right now. Given a werewolf’s sharp hearing, he wasn’t going to have the chance to act on whatever she’d bought him.

Opening the box was probably going to give him a raging case of blue balls.

“Open it,” she said, her voice strangled.

Not able to look away from his mate, Mason snagged the box off his bed even as he pivoted to face her. God, she was beautiful. The light made her blonde hair glow and the flush on her cheeks spoke of vitality and health.

She slinked into his room and went to her knees so they were face-to-face. Not that he minded if she stayed standing. Those mile long legs and her generous chest weren’t a hardship to look at.

“Mason.” Her voice was edging into a whine, but he liked how she practically squirmed as she stared at him. “Open it, baby. Come on. You’re killing me.”

He was killing her? Right. She was kneeling in front of her, her expression caught between lustful and eager and she thought he was the problem.

Natalie Lombard was a freaking menace and she was all his.

Sliding his finger under the folded edge on the aside, he pulled the tape free. The opposite side got the same treatment and Nat all but wriggled in place.

Wanting to give her gift all the attention it deserved, Mason tore his gaze away from her to look down as he opened the box.

A smile quirked up the edge of his mouth before he could flatten his lips to keep from laughing out loud.

Natalie was one of a kind. No one other than her would ever think of giving him a pair of boxer briefs with a wolf’s head sitting square over the crotch. Holding the pair up, he couldn’t stop the crack of laughter that escaped.

Based on the positioning of the wolf’s snout, this was not a pair he’d ever wear for anyone but her. He’d never heard of 3D underwear, but that’s what it appeared his mischievous mate had given him.

Natalie’s eyes, brilliant with suppressed laughter appeared over the top of the waistband. “What do you think?”

Using his werewolf speed, Mason leaned in and stole a kiss from her smiling mouth. “I think I won’t be wearing these anywhere my brothers and sisters can see them.”

Her laugh was pure evil. “Aren’t they great? Jenny picked up a pair for Evan, too. You guys can bro-bond at your next dude fest in your bulge-enhancing, wolf’s-head under thangs.”

She gave the last word such a hideous twang he grimaced. “Ahh, thanks.”

There was no way in hell he was wearing these with anyone but Natalie in the room.

His mate had to reap the consequences of her actions. If that meant staring at his dick filling out a wolf’s snout all night, that was the price she was going to pay.

When her lashes fluttered down and she raked him with an appreciative glance, Mason somehow didn’t think it would be a hardship for her.

Saucy minx. She knew exactly what she’d be getting when she bought them.

Snagging her and dragging her close for another kiss, Mason tossed the mildly naughty underwear back on his bed. He’d model them later.

For now, he had a sassy woman to shower with kisses to show his thanks for the unexpected gift.

Natalie was entirely willing to go along with his impromptu plan.

(And if you’re wondering what the inspiration picture was, allow me to share… 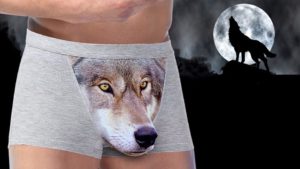 Don’t worry, guys. You can buy them from Amazon for your well-endowed special wolfy somebody!)