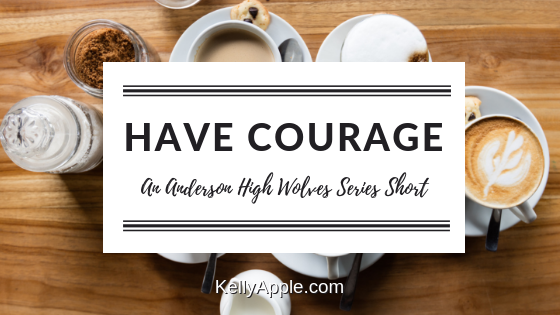 Like the seasonal coffees Matty’s favorite coffee shop experimented with.

It wasn’t that she had been adverse to trying new things before, but rather that the thought of just going somewhere to do something like get a coffee hadn’t been on her radar.

Plus, money had been scarce and she’d never had a few extra dollars to spend on anything as trivial as a coffee. Especially not when it meant being out in public with all those accusing eyes on her.

Matty had changed that.

He gave her courage. Whenever she started to get squirrely, he would put his wide, warm palm on her back and give her a moment to shove her fear into the dark corner where it belonged.

Nobody was looking at her. Not the way she imagined.

Most of the town didn’t remember what she’d done. Not really.

It still made her feel vaguely ashamed that she didn’t have much of her own money to spend, but she didn’t know how to voice that disquiet without making Matty feel bad for making her feel bad about it.

It was a weird, circular thought and sometimes she got caught in it way too easily.

The only way to break out of that headspace was to catalog the things she could do to change the circumstances that made her feel inadequate.

If she had a little money of her own to spend, she wouldn’t be mooching off Matty.

So she put on her big girl panties and started looking for a job.

Matty’s mom had sat her down and told her—in the type of motherly voice Lane wished her mom would take with her—that while she was welcome to work if she wanted to, it wasn’t necessary.

“You’re Matty’s mate, Lane,” Mrs. Bridges had quietly told her. “You’re our daughter in all the ways that count.”

Lane hadn’t known what to think about that sweet sentiment.

But it had loosened the knot in her gut enough that she didn’t try to find excuses to stay in when Matty asked if she wanted to do anything.

That’s how they’d ended up at the coffee shop on a Friday night, two peppermint mochas in Matty’s big hands as he expertly wound his way through the crowd to claim the corner table by the window.

It didn’t take long until a few other pack members wandered over and made themselves at home.

Lane watched them as the settled in, unable to stop the smile that curled the corners of her mouth.

She loved watching Matty with his friends. As Evan’s second, he outranked all the others in Evan’s small pack, but he never treated them like he was more important than they were.

His smile was quick and easy. His laugh made her feel warm.

The way he’d glance over every so often to make sure she didn’t need anything else made her heart swell with love.

She’d been alone and unloved long enough to feel a jolt of sheer joy whenever she caught him looking out for her. She hoped that particular jolt never went away.

Sipping the sweet, minty drink, Lane inched her chair nearer to Matty’s until they were close enough they bumped every time one of them moved.

That was one of the things she loved the most. Being able to touch him whenever she wanted without fear of him drawing away made her heart feel full.

“Have courage,” she whispered into her cup.

Matty tilted his head and smiled at her.

Feeling brave, Lane leaned into him and rested her head against his shoulder. Without pause, his arm came around her and he tucked her in tight to his side.

Matty had given her wings. Every day he gifted her with them anew.

Matty was her center and her light.

With him, anything was possible.

Want to see see how Matty and Lane ended up together? Grab The Girl Most Likely for their story or Anderson High Wolves: The Complete Novella Collection to meet all the wolves of Anderson High.