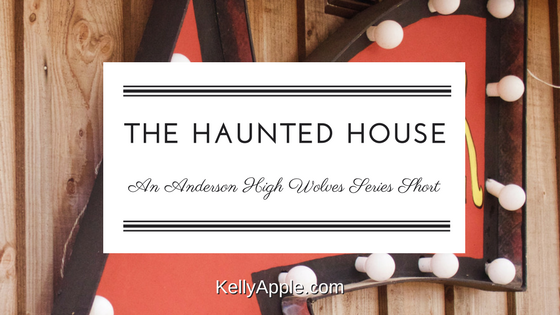 Jenny didn’t remember the last time she went to the fair. In fact, other than vague memories of her mom coaxing her to try the kiddie roller coaster, she remembered nothing.

Breaking off from the others on the midway—Natalie looking terrified as one of Mason’s little sisters ended up in the goat pen—Jenny took it all in.

It smelled like popcorn and bodies. Too many people packed into too small a place. Jenny wanted to tug Evan off to the side and take a minute to grow accustomed to it, but her darling man had a destination in mind and he kept pulling them forward through the crowd. Not wanting to ruin his fun, she shelved the idea of finding a quiet spot and went along for the ride.

When he finally stopped in front of one of the rides, Jenny blinked a couple times to make sure she was seeing things right.

“The haunted house? You want to go through the haunted house?” Cringing a little at how shrewish she sounded, Jenny drew in a deep breath and mentally reminded herself it was only a ride. Not real.

Evan sounded so adorably excited Jenny didn’t have the heart to tell him going into the creepy structure was the last thing she wanted to do. “Should we get in line?” she asked instead of running the opposite way.

There wasn’t a line. Which probably said a lot about the quality of the ride, but Jenny smiled gamely at her love when he took her hand and led her to the bored attendant standing beside the door.

Handing over their tickets, Evan tucked Jenny into the curve of his body and guided her in.

It took a moment for her eyes to adjust to the sudden gloom. Evan waited patiently beside her until she could make out the dusty, ragged room they’d entered into.

“Okay,” she said, trying to sound positive. “Where to?”

Instead of leading her into the heart of the house, Evan tipped Jenny’s chin up and kissed her sweetly on the lips. “You know what I love about the haunted house?” he asked as she blinked up at him.

“How there are all these nice, dark corners for two people to get lost in.”

Of course Evan would think that. He loved dragging her off into dark closets and kissing her senseless while everyone outside was completely clueless to what they were doing.

Her wolf had a bit of an exhibitionist streak in him. He liked the idea of almost being caught.

Jenny didn’t bother to stop her smile. She’d spend the rest of her life giving Evan every last one of her smiles. Because they made him happy.

It might be dim and gloomy in the room, but she could still see the way Evan’s eyes crinkled at the corners when he grinned down at her.

“My goal,” he said, his voice solemn despite the mischief dancing in his eyes, “is to kiss you in every dark corner we can find.”

That was a very nice goal. Achievable.

Jenny certainly liked the idea of helping him reach it.

“Between kisses,” he went on, “I’m going to show you some of the tricks they used to make this otherwise normally unscary place creepy as hell.”

That didn’t sound nearly as fun as the kissing part, but Jenny didn’t mind. Not if kisses were her reward for listening to Evan deconstruct how something was put together.

“Sounds like a solid plan.” One she could get behind, at least. When Evan leaned in and kissed the tip of her nose, Jenny started laughing. “I hope I get better kisses than that.”

Her wolf was a flirt and a tease. He’d spent every waking moment since that terrible day he’d smelled old blood on her showing her how much she meant to him. He’d cuddled her and coddled her and lavished all his love on her without restrictions.

She was the luckiest girl on the planet.

If Evan wanted to spend the rest of this ride kissing her nose or forehead, she wouldn’t stop him.

As long as it made him happy, she’d support him. She’d walk through these dark hallways and try not to scream when people jumped out at them.

Knowing he could see perfectly well with his enhanced senses, Jenny pursed her lips and waited. Her patience was rewarded when Evan took her mouth in a blistering kiss. One that probably fogged up the lenses of any cameras that were watching.

Right on cue, a speaker crackled. “Please proceed through to the room to the next stage of the ride.”

Laughing, Evan made Jenny was securely tucked against him before doing as they’d been asked.

And he did, indeed, kiss her in every dark corner they found.