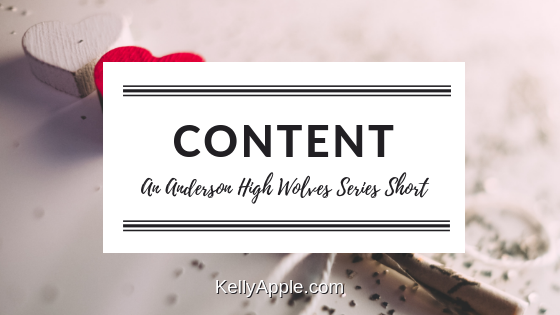 Jenny floated on a sea of warmth.

It had always been like that for them. Well, maybe not always.

It had been like that ever since Evan had started sneaking into her room at night to wrap her in his arms as they slept. Jenny woke up warm and content. Happy.

Breathing her man’s scent in, she couldn’t help the smile that curled up the corners of her mouth. Neither could she stop her fingers from tracing over the firm swells of his pecs.

When those same fingers ventured across his ribs, however, she was forced to stop. Mostly because Even twitched ticklishly and caught her hand.

“None of that, babe,” he said in his deliciously sleep roughened voice.

Boy, did her wolf dislike being tickled. That hadn’t been her intention, of course. She’d only been marveling at how wonderfully muscled her boyfriend was.

Having his press her hand flat against his ribs wasn’t any hardship, though, so that bubble of contentment continued.

As did his scent.

MAN, she loved how Evan smelled. Like chilly nights and man.

Burying her nose in his shirt, she drew in a deep breath. Evan’s chest moved in a laugh, but he didn’t stop her. How could he? He did the same to her all the time. He sniffed her hair. He wrapped himself around her for the sole purpose of burying his nose against her neck and breathing her in.

She’d gotten over her embarrassment of PDAs because she loved when he did that so much.

It was as wolfish trait. Matty and Mason did it to their girlfriends, too.

Lane always turned a fiery shade of red and giggled, but she didn’t push him away. Natalie…well, Natalie got aggressive. She’d get a gleam in her eye that warned any female in the area away from her man. Then she’d fist a hand in that glorious tangle of Mason’s hair and practically climb him so she could do the same to him.

Jenny didn’t get embarrassed like Lane did and she wasn’t nearly as bold as Natalie. She just loved how Evan would press a little kiss against her skin before taking a deep breath.

Letting out a slow breath, Jenny tilted up her chin until she could see her boyfriend’s face. The sun was barely coming up, so he was more in shadows than anything, but she could make out the familiar edge of his jaw and the sexy line of his mouth.

Channeling Natalie, she scooted up until they were nose to nose. “Hello, handsome,” she whispered.

This close, she could see how his eyes crinkled when he smiled. “Hello, beautiful.”

She loved when he dropped endearments. They made her feel warm and loved.

He made her feel warm and loved.

He made her feel beautiful. She wasn’t just Jenny when he looked at her. She was Evan’s Jenny. She’d do whatever she needed to do to make him proud. To make sure he was as content as he made her.

She doubted he could see her smile. They were too close and his eyes hadn’t moved from hers. “Right back atcha.”

Jenny wasn’t eloquent. She never had been. Fortunately for her, Evan seemed to adore her just the way she was.

Awkward with crazy bed head and everything.

It was weird how life worked out sometimes. Before Evan, she’d done things that still gave her nightmares. She’d been desperate and resigned.

After Evan, she’d seen how different things could when you have a support system to help you out when things went bad.

She tried not to dwell on the what-ifs, but sometimes they crept through her head in the darkest part of the night. What if she’d had someone to turn to when her mom had gotten sick? What if she hadn’t been forced to deal with her stepfather while trying to keep her little brother safe?

What if Evan and his family had never come into her life?

Everything would be different now, that was for sure.

Pushing those thoughts away, Jenny leaned in and pressed a kiss to her wolf’s willing mouth. She loved this man who could take the shape of a beast. She loved his family. She loved his pack.

They were hers now.

Wound together like a giant ball of string and she was fine with them never getting untangled.

They were hers. She was theirs.

Another kiss, this one deeper.

They’d weathered a storm of her own making and come out stronger for it.

With her wolf at her side, Jenny knew she could handle anything else life chose to throw at them.