Howdy, everyone! With Thanksgiving in the US coming up this week, I thought it would be fun to revisit some of the characters from old series to see what they’re thankful for. First up: Jenny Reynolds, everybody’s favorite accidental murderer from the Anderson High Wolves series. 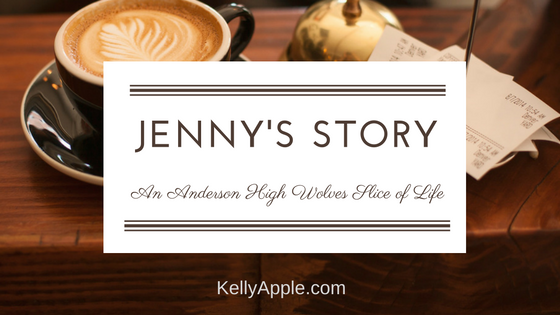 Evan’s mom thinks I should make a list of all the things I’m thankful for.

Jenny stared at the line she’d just written and grimaced. Geez. This wasn’t a five paragraph essay. No one was going to read the stupid thing but her. For an introduction, that was awkward and clunky and downright embarrassing.

Crumpling up the paper, Jenny tossed it in the trash and sat staring at the blank sheet in front of her.

Evan’s mom had told her she needed to focus on the good and that making a list of everything she was thankful for might help her find her balance when the world got too loud around her.

She had no intention of listing things in any particular order, but the first entry should be special to her, she decided. Which meant either Evan or Taylor. Both of them held equal sway over her heart. Evan touched the romantic in her, whereas Taylor was her baby brother.

She’d killed to keep Taylor safe. Evan had stepped in and lent her his strength when she didn’t think she could take anymore.

They were both special to her, both beloved.

Screw this. She would bullet point the darn thing and not agonize over whether she put her boyfriend or her little brother first.

Underlining the title, she narrowed her eyes in concentration. The first two points were easy. The third slipped from her pen and made her laugh. The rest followed with surprising ease.

Once she’d finished, she sat back and took a deep breath. There. Done. And she did feel a measure of peace as she looked over all the good things in her life.

Evan’s mom had been right. Focusing on things she was thankful for took the sting out of the bad.

Smiling, Jenny left the paper on Evan’s desk and went downstairs to find her gorgeous man.

There you have it, the things Jenny is thankful for!

As for me, thank YOU for reading my books!