Since I’m close to the halfway point on Heart of Stone (psst, did you hear about that?!?!) and I’m wallowing in all things Vane (and Cin), this week’s Feature Friday is all about the grumpy gargoyle Ari drags into her circle of friends.

Vane was introduced in The Wicked Gargoyle and he…well, he’s sort of a man of mystery. He doesn’t take center stage often and he has a few tricks up his sleeve that the others don’t.

And by that, I mean he can do a little magic.

He’s also kind of grumpy and growly and FUN to write. So, there’s that.

(Maybe I should have started with Cin first since she was introduced earlier on in the Monstrous series, but my grumpy gargoyle wanted to be in the spotlight for once and who am I to deny him?) 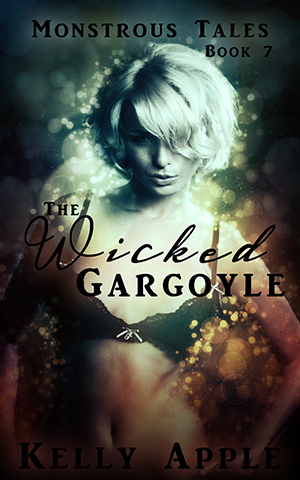 Ari’s on a mission—find and recruit monsters to help save her beloved Guardian. The more allies she can gather, the better her beloved’s chances of survival.

When she hears of a gargoyle hiding out in the bell tower on campus, she does what any other girl who loves supernaturals would do—she seeks him out to see what it’ll take to sway him to her side.

He might be made of stone, but this wicked gargoyle knows a good deal when he hears it and he’s more than willing to help Ari out.

Provided she can help him out first.

Warning: This book contains a rock-hard monster and a girl with few inhibitions. You can take the monster out of the bell tower, but just try to get him out of the girl!