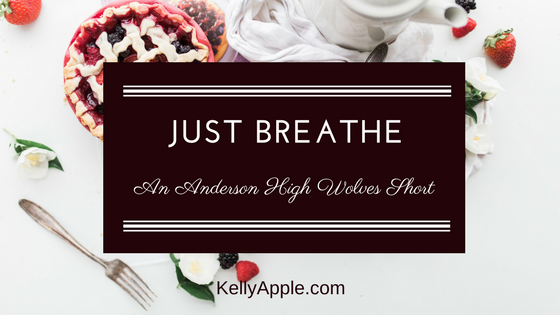 Mason was up to something. Natalie could feel it.

This was the third day they’d come up to his grandparents’ house this week. That in itself wasn’t strange, but the way he’d kiss her on the forehead and disappear as soon as they arrived was.

Mason did not like to be far from her, after all.

If Natalie had a speck less confidence, she’d worry he was getting bored with her. Yeah, right. That wasn’t it. Her man adored her. He worshipped her.

When he looked at her, she saw forever in his eyes.

So he wasn’t bored.

Which meant he was up to something.

She’d figure out what he was doing once she finished with this crust. Or maybe the crust after that.

Vivienne Armstrong wasn’t likely to let her waltz out of the kitchen with the pies half done, after all.

“Is that one ready for the filling?”

Pulled out of her musings by Vivienne’s voice, Natalie nodded. “How many more do you think we’ll need?”

Grandma pursed her lips and narrowed her eyes as she looked in the direction of the ton of apples they’d peeled earlier. “Three should do it.”

Biting her tongue so she wouldn’t groan out loud, Natalie resigned herself to another hour or two making crusts. Normally, she’d love this one-on-one time with Mason’s grandmother. But right now she wanted to abandon their project and head out to find Mason.

“Three it is,” she said cheerfully, determined to put on a happy face.

The narrow-eyed gaze Vivienne had been giving the apple filling transferred to Natalie. Bending her head so she didn’t have to look at the older woman, Natalie set to work on mixing the ingredients for the next batch of crusts.

“Natalie Lombard, you know I absolutely love you, don’t you?”

Without raising her head, Natalie cut her eyes in Vivienne’s direction. That was an odd question.  Hearing it made her eyes well up because she couldn’t think of a time when her own parents had ever just up and said something like that.

“Of all my grandkids, I never would have thought Mason would be the one who found his mate this young, but I should have.”

Cutting the butter into the flour suddenly seemed a whole lot less important than hearing what Vivienne had to say. Leaving the pastry cutter in the bowl, Natalie turned toward her. She didn’t say anything, just watched the older woman as she made patterns across the top of a pie with strips of crust.

“Mason’s always been a rock.” She rolled a strip of dough and cut it in half. “He’s the one we all know we can rely on.” Dexterous fingers coaxed the cut edges to furl outward slightly until she had what looked like a perfect rose in her hand. “He’s smart and kind and he’s always willing to lend a hand when needed.”

Natalie watched her create these masterpieces as she spoke about the man who was the center of Natalie’s world.

“When he decides to do something,” Vivienne went on, laying a trio of her created roses on the edge of the crust Natalie had just finished, “he gives his all. He believes if something’s worth doing, it’s worth doing well.”

Natalie’s head bobbed at that. There was no doubt in her mind that was true. Mason didn’t care what others thought of him. He saw a need and he fulfilled it with everything at his disposal.

“He’s making you something, dear. I imagine he’s close to being done.” Vivienne’s too-sharp gaze pinned her in place. “Don’t go ruining it by rushing out to see what he’s up to.”

Uggh. She felt like a kid called into the principal’s office.

Dammit, Vivienne was right. She needed to show a little trust in her man. Patience. Understanding.

Her mate would never do anything to harm her. He cared far too much to inflict casual hurts.

He wasn’t her mother or father.

Letting out a slow breath, Natalie let that soak in. Being up to something wasn’t a bad thing. Surprises weren’t meant to hurt.

Sometimes it was hard to forget the lessons her parents had taught her, though.

The lump in her throat made it too hard to speak. She made a noncommittal sound as she looked down at the mess of flour and butter in the bowl.

Fine. It was coming along fine. She’d finish cutting in the butter and add the rest of the ingredients. She’d make the crust and it would be the best damn crust to come out of this kitchen today.

Another slow breath. In and out.

This one would be Mason’s pie. She’d pour all her love for him into it and make sure he knew he how very much he was loved.

By her. By his family. By everyone he’d ever extended a hand to help.

The urge to cry was still there, but it was different now. It didn’t hurt.

Mason Armstrong had made the first and most important chip in her armor. Vivienne Armstrong and her pies dissolved another piece.

Someday, she thought she’d be able to look at the world without seeing it through the distortion of what her parents had done to her.

It was a goal she would work towards.

For now, she needed to concentrate on making the best damn pies the Armstrong family had ever tasted.

Come back next Tuesday for the final installment of Natalie and Mason’s story.