The conclusion of the Anderson High Wolves shorts featuring Mason and Natalie and their weird gift-giving. 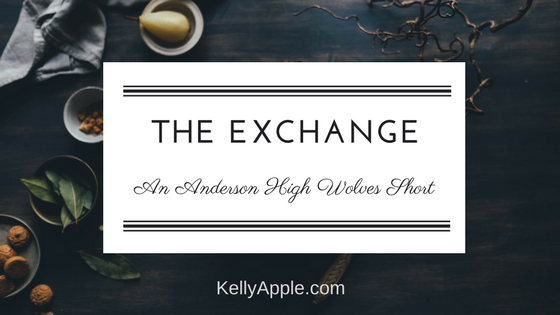 Mason’s grandmother had shooed him out of the kitchen moments ago. She’d taken one look at the sawdust on his clothes and ordered him to get away from her precious pies.

He’d gone, of course. His grandma could be downright scary when it came to her pies and he loved those pies enough to make sure the supply line remained open. Plus, he loved his grandma. If she didn’t want him around, he’d beat a retreat as fast as wolfishly possible.

Natalie came stumbling down the back steps mere moments after he did. Her expression caught between confusion and outrage, flour dusting her collarbone and throat.

He liked that. He could just imagine how it had ended up there. She’d lift one flour-covered hand up to cover her pulse when her heart rate skyrocketed upon seeing him.

Mason knew his eyes had gone to wolf when Natalie stumbled to a halt and that floury hand rose up exactly like he’d seen in his imagination. A growl rumbled out of him and he watched her like a predator watches his prey.

The thought that she might run had him shifting forward to the balls of his feet.

He could smell the sudden rush of adrenaline on her. Her hand couldn’t hide how her heart was pounding now. He could hear it. Smell it. Taste it.

A chase through the woods would be nice. The perfect end to a perfect day.

And when he caught her…

Another harsher growl rumbled out of him.

He wanted to catch her. He wanted to run and chase and catch and play with his food before he devoured it.

Natalie didn’t run. Not away from him, at least.

She stalked toward him, bold as you please, her hand falling away from her throat to leave the ghostly outline on her skin.

Gods above, he loved it. He loved the strength in those seemingly delicate hands. If he stepped out of line, those hands would haul him back.

He didn’t doubt it.

One of the hands in question thumped down onto his chest and he stared at it, the hunger to chase fading as her touch and scent wrapped around him. His mate. His love.

She smelled like apples and cinnamon and Natalie. Three things he adored.

“Grandma said she’d finish up in the kitchen.”

Mason jolted at her words. She didn’t flinch away from his too-sharp stare when he raised his eyes to hers. She stared back, her gaze only dropping to watch her fingers caress him lightly through his shirt.

Damn clothes. He didn’t like the barrier between them.

His need for skin-on-skin contact was high. He wanted to wrap her in his arms and feel those strong curves against him. He wanted to coax those needy sounds he loved from her.

“She said you had something to show me.”

His grin was definitely wolfish. He had something to show her alright.

His love’s eyes narrowed and that caressing finger gave him a sharp poke. “Not that, dork. Your grandma wouldn’t send me out here to check out your trouser snake.”

Given the amount of pheromones he was throwing off, maybe that’s exactly what she had in mind.

Mason blinked. No. His grandma was wonderfully candid about natural urges, but he didn’t think she’d condone him getting naked with his mate on their back lawn.

His wolf disagreed. Having Natalie’s hands on him sounded like heaven and he wanted it.

Mason wrestled his animal side down. Think. Think.

He’d gone into the kitchen for a reason. He’d…he’d…finished his gift for Natalie. He wanted to show it to her.

A mate gift to show his appreciation for his beautiful mate.

Grumbling, his wolf retreated. Natalie deserved to be showered with gifts. If she didn’t like their creation, he’d bring her a fresh kill as a token of his love.

That glorious hand had gone back to petting his chest.

“Mason? Is there somewhere we need to go?”

Brows pulling down, he nodded. Words hovered on the tip of his tongue, but he was dumbstruck by her beauty. And that ghostly handprint on her throat kept drawing his eye.

He adored that spot on her. Loved it. When Natalie was ready, he’d place his mark there. A claim for all the world to see.

His wolf chuffed in agreement.

Capturing her stroking hand, Mason tugged her toward the shed across the yard. Half hidden by trees, it looked innocuous and small.

Inside, he’d poured his heart out to her.

An ode to her beauty. Her strength. Her.

He hadn’t covered it when he’d gone to get her from the kitchen. He hadn’t cleaned up much either.

He should have. The layer of sawdust and shavings under his carving looked messy.

Glancing at her, he stilled.

She didn’t see the mess. She only had eyes for the small statue sitting in the center of the table.

“Oh, Mason. How beautiful,” she breathed.

Mason’s chest expanded and pride filled him. She liked it. It wasn’t perfect—he enjoyed woodworking, but he wasn’t a master at it—but it was unmistakably them. A human woman and a too-large wolf.

Sliding behind her, Mason wrapped his arms around his love.

He smelled salt and saw the tears trembling on the edge of her lashes. Happy tears, he hoped. Nuzzling in, he set his lips against the tempting spot on her throat and let everything Natalie soak into him.

Her scent was his version of nirvana. The feel of her in his arms was home.

She twisted and caught her face in her palms.

“You beautiful man,” she said and found his mouth with hers. “Beautiful, perfect man.”

Mason closed his eyes and sank into the kiss. He’d poured his love for her into the statue as he teased the details from the wood. Now he poured that same love into their kiss.

He loved this woman.

He’d protect her and love her and show her she was the most important thing in the world until she believed it. He wanted his Natalie to wake up every morning knowing she was loved exactly as she was. She’d never need to change for him. She’d never need to be something other than herself.

His mate was perfect.

They were both breathing hard when they finally parted and Mason studied the beauty clinging to him as he worked on filling his starving lungs. He knew his wolf was looking out of his eyes, although he wasn’t pushing any further forward.

Natalie’s lashes fluttered up and she smiled impishly. He loved the sparkle in her. He loved how the tired, defeated look she used to wear had vanished in their time together.

He smiled. He’d had his concerns, naturally. Her gift to him had been light-hearted and fun. His…wasn’t. It was them. He’d meant it from the heart, but he’d worried it had been too much.

“And I love you, you handsome brute,” she went on, the sparkle in her eyes getting brighter.

Going up on her tiptoes, Natalie pressed a kiss to his chin. Then she snuggled into his chest, arms tight around his middle, and hung on.

Dropping a kiss on the crown of her head, Mason did the same.

On the table, the lovingly carved wooden statue of a woman and her wolf looked on in approval.

Mason and Natalie’s story has come to an end, but there are MORE Series Shorts in the works. Check back next Tuesday for a new adventure.