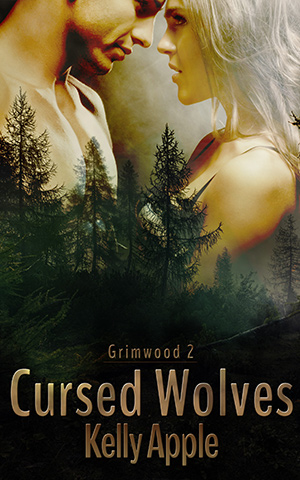 Lucy Grimm knows what it’s like to be on the outside. Ever since her curse kicked in on her 18th birthday, she’s lived in the woods on her own, cut off from everyone but the other cursed and slave to the cycles of the moon. Her one joy in life is spying on hunky Connor Redfield while he works at his grandmother’s inn.

Connor knows someone’s out there watching him, but he can never get close enough to catch them in the act. When he decides to take matters into his own hands and lay down a trap for the peeping tom, he doesn’t expect to end up with a bundle of nervous woman who runs every chance she gets.

He certainly doesn’t believe she’s one of the legendary cursed wolves that roam the woods.

For all that she’s fighting against herself, Lucy can’t help but like the burly lumberjack with a heart of gold. With the moon coming up on full, Lucy doesn’t dare trust herself when her wolf takes control. But Connor remains unconvinced and the more time Lucy spends with him, the more she longs to stay.

Can a cursed wolf find love with a mortal man? Or will her beastly side destroy her heart’s desire?